One of the first tangible pieces of evidence that I was creating a “real business” was setting up a dedicated shipping station. Before that point, I had always just taken my packages to the post office to ship, picked up some flat rate boxes on the way home from my day job, or randomly printed off some labels on my old college printer and taped them to re-used Amazon boxes. Not exactly professional.

Shipping items isn’t hard but it’s an integral part of many businesses. That packaging that you send your items in is about the only physical impression that a customer will have of your business. If your product is great but your shipping is crappy the chances of you having a repeat customer fall dramatically.

Luckily, a shipping station isn’t overly complex. I already had an old desktop that would function as the brains of the system and so I only needed to pick up a few things:

Since I’ve already written extensive articles addressing the first two, it seemed only right for me to put down my experience in researching, shopping for, buying, and using several of the most common postal scales.

I wish I could say that I bought 20-30 scales and did some sort of empirical scientific test to tell you which was best but that’s not quite true. The best I can do is draw upon my own experience and let you know what I think is the best bang for your buck. I have used each one of the scales that I’m recommending (two of them for several years now) and know that they’ll work well for you too. So let’s jump into it!

Characteristics of the Best Postal Scale

It goes without saying that accuracy is probably the most important characteristic of a great postal scale. Unless you are able to get an accurate reading of your packages there is no point in having a scale at all. Many lower-quality scales are heinously inaccurate or else grow less accurate with time.

We looked for scales that were accurate right out of the box (meaning the didn’t need calibration before use) and maintained it long term. Most scales will get less accurate over time, especially if they are abused, but our scales have been going strong for over 5 years and have not grown noticeably less accurate.

If you are shipping from home or from a small business, the majority of shipping scales will easily accommodate the largest items you’ll be shipping. This is especially true if you’re an eBay seller who mainly ships via USPS. Their maximum weight limit of 70 pounds is within the reach of even budget scales.

The real test of capacity is having a low minimum weight. Many scales that have a respectable max do so by giving up the ability to weigh light packages. As we ship a good deal of first-class boxes we want to have the ability to weigh items down to an ounce with at least .1oz accuracy. Since we don’t have the room to hassle with two scales, we needed to find one that would weigh at both ends of the spectrum.

If you’ve ever tried to weigh a piece of luggage on a bathroom scale, you’ll know the importance of having a detached screen. Without one, you will not be able to see the readout when shipping large packages.

Another benefit of a detached screen is that you are able to mount it in an easily visible location. Instead of bending down to see what the screen on the scale says, we have our readout mounted at eye level on the wall where a quick glance will tell us all that we need to know.

When I purchased our first scale I thought it would be perfect for our business. And, to be honest, it really wasn’t bad. However, when my mother-in-law laughed herself silly when she saw me trying to balance a boxed mattress on it (the platform measured 8″x8″) I figured that there was probably some room for improvement.

The large the platform you have space for the more stable (and therefore accurate) your scale is likely to be. As an added bonus, shipping scales with larger platforms generally come with higher maximum limits.

As I mentioned above, our current scales have been going strong for over 5 years. Having equipment that lasts a long time is about more than just buying replacements. The mental energy and potential downtime can both be detrimental to your business.

Before our current scales, we had another of the same model. It lasted until the day I stepped on the screen and cracked it. The scale still worked but I couldn’t read the weight. Despite ordering another one via Amazon Prime that same day, I was forced to go to Walmart and buy a food scale so that I could get packages sent out.

If you have a permanent shipping station, having a scale that runs on AC power will be God-send. You can simply install it and forget it. In my case, however, I often move my scale around to weigh different things and so I can fit large items on it. In those times it is super helpful that it can be battery powered as well.

While I don’t want to have to calibrate a scale before using it, it is nice to have the option. If at some point down the road, our scale becomes less accurate I would like some recourse to fix it rather than just throwing it away and starting over. 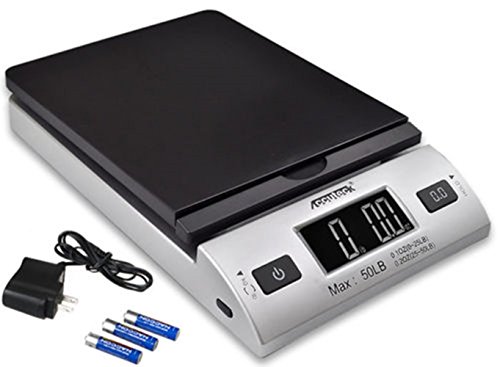 If your business is just starting out, odds are your funds are at a premium. In the first year or two, I wanted nothing more than to invest back into my business to grow it faster but we could barely stay afloat. The obvious way to increase your longevity and leverage for growth is to invest in tools that have the greatest ROI. In the world of shipping scales, this is it. For just a little bit more money you could do better, but when compared to not having a scale at all this is an absolute game-changer.

ACCUTECK is well known for making affordable and durable scales and are the makers of some of the best selling scales on Amazon. This is their entry-level model which provides even businesses with the meagerest coffers the ability to weigh their packages.

I would get this scale if you ship mainly (or only) small packages (since it has a 50lb weight limit, the lowest in this review) and need something to get going with. The platform is a bit small which also makes it a poor choice for big or heavy packages.

With that being said, this scale does much better than you would expect at this price point and I would not hesitate to recommend it to any home-based business owner or a person who needs to weigh/send lots of mail. 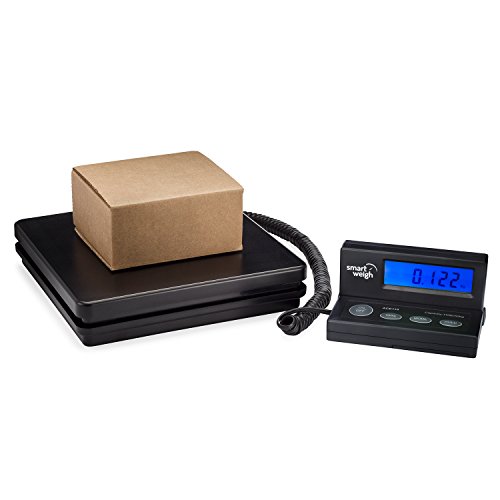 Unless you have a warehouse and are running hundreds of orders through it per day, get this scale. We have used this scale exclusively for more than 4 years and have never been disappointed in it.

This scale has a great minimum and maximum weight, is super durable, easy to move around, has a detachable screen (with battery or AC power), and every other feature you could possibly want for in the best postal scale.

The drawbacks to this scale are few, but they’re there. First off, don’t step on the screen if you weigh over 250 pounds. This is the way I broke the first ACE110 that we had. Secondly, I wish the connecting cord for the readout was longer so I could mount it wherever I wanted. Luckily, it is a common cable that you can get in any length. just about anywhere. Lastly, I wish the platform was a bit bigger. With that being said, if it was much bigger it would compromise portability and probably wouldn’t fit on my desk.

All in all, this is the scale that I recommend to almost every small business. We have shipped up to 40-50 orders in a day and have never been held back by it. And if you do happen to stomp the screen into the concrete? Well, they’re cheap enough that it doesn’t really hurt to replace them. 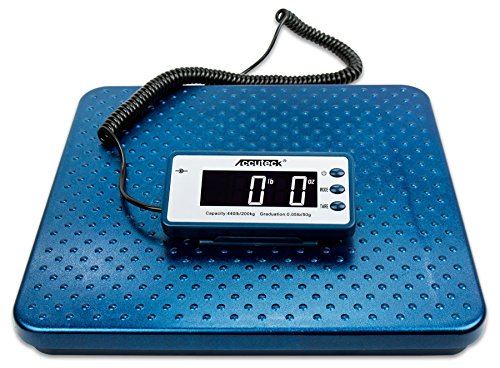 If you regularly sell/ship packages that are either heavy or ungainly enough that they wouldn’t be at home on the Smart Weigh’s 8″x8″ platform, we’ve got a better option.

The ACCUTECK ACB-440 does (almost) everything that the Smart Weigh does with a max weight capacity that is 4x higher! Now, as is typical with high capacity scales, you do give up a bit of precision in the lower numbers as well as a super low minimum weight. People who ship very light items will not love this scale as it often fails to register items that weigh only a couple of ounces.

With that being said, it is the best deal is budget high capacity shipping scales on the market! 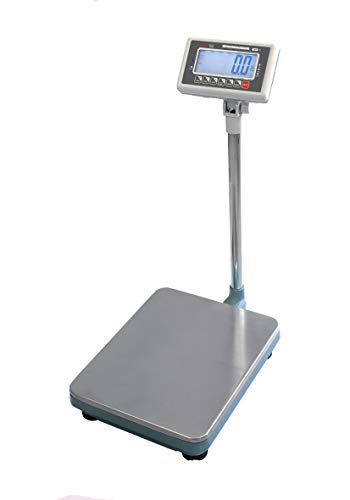 If you’ve been disappointed thus far because you want a “real” shipping scale, then this is it. Before starting my business I worked in a warehouse that had 4 shipping stations set up, all using these scales. We sent out around 200 large (usually multi-box) orders per day and we never had a scale problem during the 3 (very long) years that I was there.

This scale is meant for high volume boxes of every shape and size but isn’t meant for letters or tiny packages. If you are shipping those, get a wimpier scale, not an all-metal one like the TBW-500.

The one drawback to this scale is that it does not have a roller top. While it was never a big deal for me, some people prefer a roller top as it’s easier to move packages on and off of (in addition to rolling, it’s easier to get your fingers under them). However, if you’re in the market for a heavy-duty roller scale you’ll probably need to double your budget (at least) or start shopping for used options. It’s a matter of preference anyway.

The TBW-500 scale will integrate with either a computer or printer, has a detachable screen, huge weight capacity, and a great size platform. If you’re looking for heavy-duty and reliable, you can’t do much better than these. So save yourself the trouble of buying another one in a couple of months are just get several now!

At the end of the day, the best postal scale is the one that is within your business’s budget while meeting all of your needs. The ACE110 is the best shipping scale we’ve used for businesses at or near our level and I don’t see us changing to another any time soon.

So, which option you choose, get one, get a backup, and may the sales ever be in your favor!