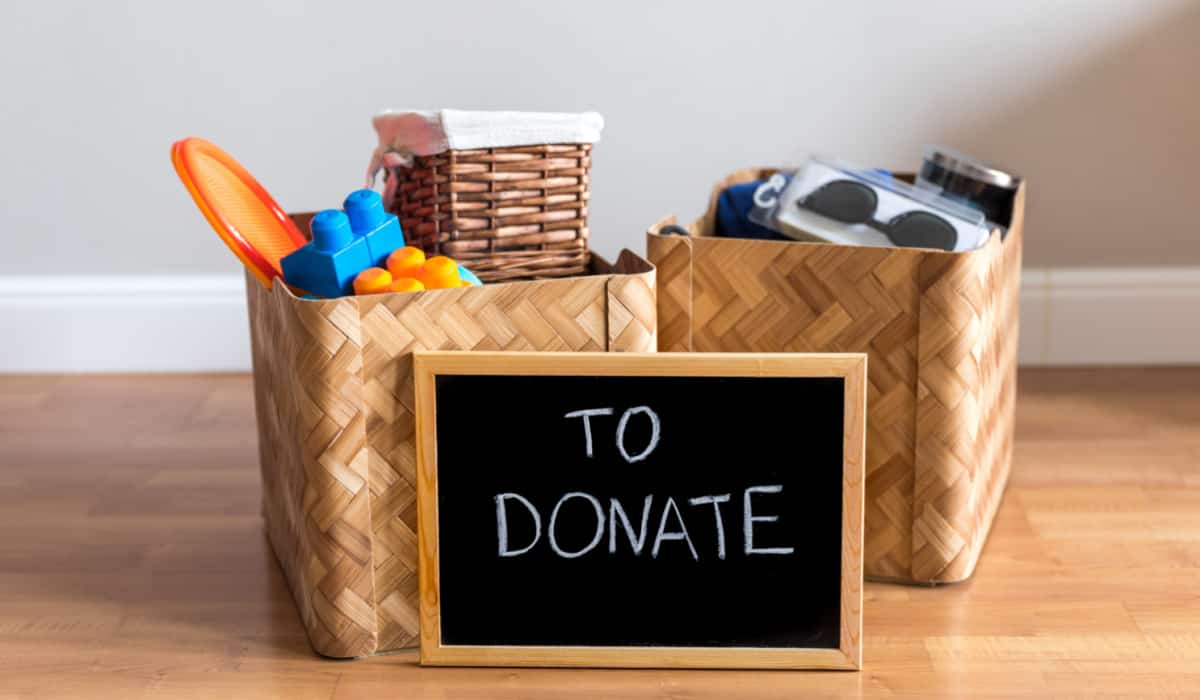 My wife and I try to do a major donation run every couple of months. We’re not quite Marie Kondo but we do our best to keep our house simple and uncluttered (although it doesn’t help that we’re always thrifting).

During one of our latest purchases my wife and I debated for quite a while over keeping a metal rack we had in our bathroom. In the end, we decided we didn’t have a great place for it right now so, in the interest of being more minimalist, we took it apart, bagged all the hardware, and put it in the car to take to Goodwill.

You can imagine how much it bummed me out when I handed the box of pieces to the worker and he walked straight over and dumped it into, the metal recycle bin. It was a complete, labeled, and perfectly good shelf. I would rather have kept it than just have it tossed.

It turns out that the location I was donating to does not sell any furniture or home goods (like my shelf) that are donated in pieces. They accept them and toss them into the recycling or dumpster.

So, in the interest of avoiding a repeat performance, I decided to do some research on the types of things that thrift stores, including Goodwill, will generally not accept as donations.

Now, donation guidelines vary by store but, in general, these are the things that you can and can’t donate. I tried to focus on things that weren’t painfully obvious so I am sure some of these will be surprising to you, even if you donate or thrift on a regular basis!

While it may vary from store to store, these are the items that most chain thrift stores will not be able to accept as donations:

But, what about everything else?

Most other items will be accepted by thrift stores. However, a good portion of it will never hit the sales floor. Items that are accepted but not worth selling often are donated to other centers (such as the Goodwill Outlets) or thrown into a dumpster.

So let’s take a look at the nuances and see some more about the ‘whats” and the why’s of what thrift stores will and will not accept.

Can I Donate This To A Thrift Store? 11 Common Items

In general, thrift stores will accept couches, chairs, tables, cabinets, and most other types of finished furniture.

Even if they don’t really want to. Furniture isn’t a beloved item by thrift stores because they don’t bring in much money when compared to the space they take up, they are difficult to move/store, and they can’t end up not selling for way too long.

As such, most furniture is priced at fire-sale prices simply to get it gone.

There are exceptions, however, and most thrift stores will not take furniture that is:

If a thrift store won’t take your furniture your best bet (if you live in a populated area) is to wipe it off/vacuum it and stick it on the curb for free. Every time we’ve done this it’s been gone within a day or two. And if it’s not? Then, unfortunately, it’s off to the dump.

In general, old TVs are easy to get rid of. You just stick them on Facebook Marketplace for $10 and someone will be at your door in minutes.

But what if you really want to donate your old TV to Goodwill or another thrift store? Do they take box TVs? Flat Screen TVs?

In general, the answer is yes, to all.

Vintage TVs that are smaller (such as portable units) are typically accepted at thrift stores of all kinds as they do not take up much space.

The main factor that dictates whether or not a thrift store will accept auto parts is the size, cleanliness, and safety of the items in question.

In general, thrift stores will not accept large car parts such as bumpers, body panels, seats, tires, or potentially dangerous/flammable liquids such as oil, cleaners, windshield washer fluid, etc. Smaller items typically cannot be too greasy or dirty and may be accepted on a case-by-case basis.

Your best bet for selling larger items is a pawnshop or local marketplace such as Craigslist.

When you consider donating kids’ items to a thrift store you have to imagine things from their end. Their motivation is to avoid liability by selling items that could be dangerous.

As such, they typically won’t accept items that are potentially expired or have been generally recalled. For example, very few thrift stores will accept drop-side cribs, car seats, or bike helmets.

Likewise, items such as strollers will be dependent on the location.

You will have more luck donating such items as smaller church-owned thrift stores or charitable shops but you should check before donating that your item hasn’t been recalled for anything.

Kids’ clothing, shoes, and most toys are acceptable if they are in usable condition.

I’m not the first person (and I’m sure I won’t be the last…) to find food on thrift store shelves. It’s typically in a gift basket, or fancy chocolate box, or something similar. Surprisingly, I’ve never been hungry enough to buy anything I’ve found. Never shop on an empty stomach, ya know.

No thrift stores will take food as a donation, even canned foods that are sealed. Food items that aren’t expired can typically be donated to food pantries or shelters instead.

If you have food that is technically expired but still good you can try Facebook. When my wife and I cleaned out our pantry a couple of years ago we found a bunch of weird things we had bought at a clearance store and would never get around to eating. We put it all in a box and posted about it on Facebook. It was gone in about 10 minutes.

Clothing is the bread and butter of thrift store donations and sales. So much so that thousands of people (us included) make a living by flipping thrift store clothing on eBay, Mercari, and Poshmark. So, yet, you can donate clothing to thrift stores.

However, not every wearable item will be taken by Goodwill or other thrift stores.

In general, Goodwill and other thrift stores will accept clothing and shoes that are in clean and wearable condition. This includes gently used socks, bras, and swimsuits. Some items with holes that are still wearable (such as jackets or jeans) may still be accepted and offered for sale.

I would encourage you to donate all you to do one of two things with your used clothing: donate it to a thrift store or sell it at a yard sale. Even if you think an item of clothing it not worth donating most thrift stores will recycle the item instead of simply sending it to a landfill.

Used mattresses are one of the main items that people are concerned about buying used. Well, guess what, every time you go to a hotel you sleep on a “used” mattress. It’s much less gross to have one that you have actually seen and cleaned yourself.

In other words, I will defend buying used mattresses until I die!

Donating them, however, is a different proposition entirely.

Whether or not you can donate a mattress is entirely dependent on the thrift store.

The main reason that many thrift stores don’t accept mattresses is because of bed bugs and other sanitation concerns. Goodwill, for example, will not accept any used mattresses. Other second-hand stores such as Salvation Army or Habitat For Humanity will accept used mattresses in good condition.

Just be sure to call the store you’re planning on donating to before you strap your mattresses to the top of your car!

Bedding items that can be cleaned, such as comforters and sheets are typically accepted by thrift stores. Non-decorative pillows, on the hand, are typically not accepted unless they are brand new.

If you have pillows or bedding items that can’t be donated to a thrift store, consider talking to local animal shelters as they will often use them for bedding.

Most home goods are appliances are fair game when it comes to thrift store donations.

Because there are so many options in this category I’ll just hit a few of the ones that you’re probably conflicted about.

In general, thrift stores will not accept coat hangers, washers/dryers, empty boxes, or large amounts of out-of-season decorations. Most thrift stores however will accept exercise equipment, knives, pots/pans, dinnerware, and other home goods.

As thrift stores are generally thought of as the source for second-hand home goods they refuse very few home items and, when they do, they have a good reason for doing so.

As long as your items are in good working condition (and don’t take up too much space) there is no reason that Goodwill won’t take them.

Most thrift stores readily accept old books and magazines of any sort. They may choose to recycle many of them instead of putting them on the sales floor but they will at least be able to avoid the garbage.

Nearly every thrift store will accept and sell media of all varieties.

Feel free to drop off your old CD collection, video games, 8-tracks, and even your black diamond Disney VHS tapes which failed to sell on eBay.

Just be sure not to check any media that you never opened as some of the most valuable Goodwill finds were actually sealed video games and media!

There really isn’t much cross-over.

Habitat for Humanity or the “ReStore” will typically accept a wide variety of building supplies from lumber, to sheetrock, to nails.

Goodwill and other run-of-the-mill thrift stores will not take building supplies as donations. While there may be exceptions for something like a sink or ceiling fan that is still in the box they simply don’t have the manpower or expertise to test such items or the space to sell them.

While you can get thrift stores to take most things, there is a handful of stuff that, in general, I would not recommend donating:

Do not take any of those reasons as justification for not donating your unused items. I’ve known people that have literally thrown items in the garbage (items like clothing) because they never really considered donating them.

Let this be your wake-up call, donate all the things! The worst that can happen is that the Goodwill employees will tell you that they don’t take something. Then you can throw it away anyway.

At least you will have improved the world a bit by saving a few items from a landfill.