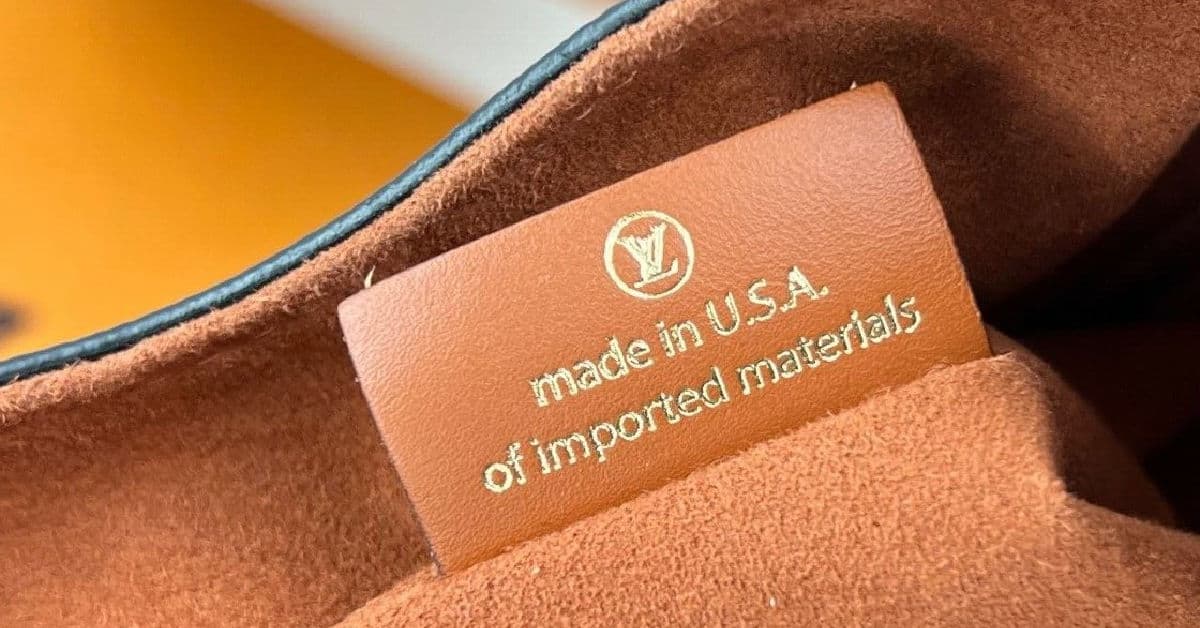 Such is the case for Louis Vuitton. In fact, more pre-owned Louis Vuitton items sell every year than new bags.

However, purchasing a used Louis Vuitton bag is rife with potential pitfalls. The most obvious of these is the potential for you to get a fake bag.

While we’ve written extensively about how to authenticate a used Louis Vuitton bag, the most obvious hallmark is where the bag is made.

Since knockoff manufacturers aren’t always forthcoming about where their products are made, you need to know other ways to spot a fake LV item. In this article, you will learn how to ensure that the products you buy from a reseller are authentic Louis Vuitton items. You will also discover the best practices of buying from resellers in a relatively safe way.

Are Louis Vuitton Bags Ever Made in China?

We buy a lot of Louis Vuitton off of eBay to resell (see our list of trusted sellers) and, if we ever get a bag marked “Made in China” we file a case and attempt to return it immediately.

LV bags are never made in China because Louis Vuitton has its operations set up in European countries.

Louis Vuitton avoids outsourcing production to China because it cannot have the same level of oversight of output. Whether ethical manufacturing is part of the equation is unclear and irrelevant to the authenticity of the Louis Vuitton products.

What matters is that, since its inception, Louis Vuitton has not outsourced its production to China. Any Louis Vuitton article that reads “made in China” is fake. However, it is not likely a smart fake. Knockoff producers usually don’t declare where their products are made. In some instances, they falsify the country of production on the tags!

So how can one be sure they have an authentic LV item? Let’s find out.

How to Authenticate Louis Vuitton Items?

To be sure your LV bag or apparel is not fake, you need to be able to spot counterfeit items. The following tips will help you sniff out a knockoff LV in a few minutes.

The biggest giveaway of a knockoff is its poor quality.

Generally, manufacturers who can afford to produce high-end bags invest in building their own brands instead of ripping off an existing one. Workshops that make knockoffs earn from the volume of their sales.

As a result, they machine-manufacture items in bulk, and that shows. If you’ve ever held an authentic LV bag, you’ll be able to tell when a bag is fake by just holding it.

Pay Attention to the Stitching

Machine stitching is very obvious when compared to hand stitching. Since most LV knockoffs are machine-made, poor stitching is one of their key signifiers.

Authentic Louis Vuitton features same-color threads, and the care that goes into the stitching is evident upon close examination.

Look Closely at the Font

The Louis Vuitton font on the interior tag is distinct from the knockoffs made from a distance. The L has a short base, and the O is round compared to the rest of the font. Most knockoffs feature “Louis Vuitton” with a nearly oval.

Look for the Country of Origin

Now that you know France, Italy, Spain, and the US as the only countries aside from Switzerland (timepieces) to make LV products, you can quickly authenticate LV tags.

Buying Louis Vuitton From Resellers vs. The LV Stores

While the above steps are necessary whenever you buy a Louis Vuitton bag or clothing article from any marketplace, they are redundant when buying from a Louis Vuitton store.

But is it worth it to purchase a product at full price just to have the peace of mind of knowing it is authentic? Let’s see.

As you may have noticed, there are plenty of perks that people buying directly from Louis Vuitton get. However, the 50% discount from resellers of preowned LV items is worth the lack of post-sales service for many consumers.

But finding the best secondary market seller is crucial. Otherwise, you end up with a fake LV item that is not worth the price you’ve paid.

All the drawbacks of purchasing Louis Vuitton items on the secondary market are related to sellers and their integrity.

Finding and verifying the seller’s integrity should be the step that takes most of your time. These best practices will ensure that you find a seller you can trust.

1. The Seller Must Have at Least 2 Years of Operating History

A 2-year period might seem too long to some consumers. But it is easy to risk the standing of a one-year-old account for a quick buck.

Given how much sellers stand to make from selling knockoffs, it is safe to avoid fresh sellers. Those with 2-year-old accounts are less likely to risk getting their accounts banned over a single transaction.

2. The Seller Must Have a Reasonably Positive Rating

Avoid sellers with extremely negative and overly positive ratings. Sellers with 100% 5-star ratings are often gaming the review system. You can verify this by seeing the date of reviews. They are almost always in rapid succession.

A good seller review is close to 5-stars but has sufficient disgruntled customers, though none complain about the authenticity of products. The negative reviews should ideally be about shipping and handling.

3. There Should be No Complaints About the Seller’s Authenticity

Even Louis Vuitton stores don’t have unlimited Louis Vuitton bags and shoes to sell. If a seller seems to have hundreds of items to sell, he’s probably dealing on behalf of a knockoff manufacturer. Used Louis Vuitton items should be difficult to find.

4. There Should be No Complaints About the Seller’s Authenticity

Finally, avoid any seller who has been accused of selling fake products. It doesn’t matter if they have not actually sold fake items. You just don’t want to risk finding out that they have by becoming their mark.

If you feel like giving the benefit of the doubt, use an authentication service before the transaction.

Louis Vuitton products are made in France, Italy, and the US. The Louis Vuitton watchmaking operation is based in Switzerland.

Most LV products sold from factory-rich countries like China and India are fake. Avoid buying secondary market LV items unless you can confidently authenticate them or have an authentication service confirm their genuineness on your behalf.