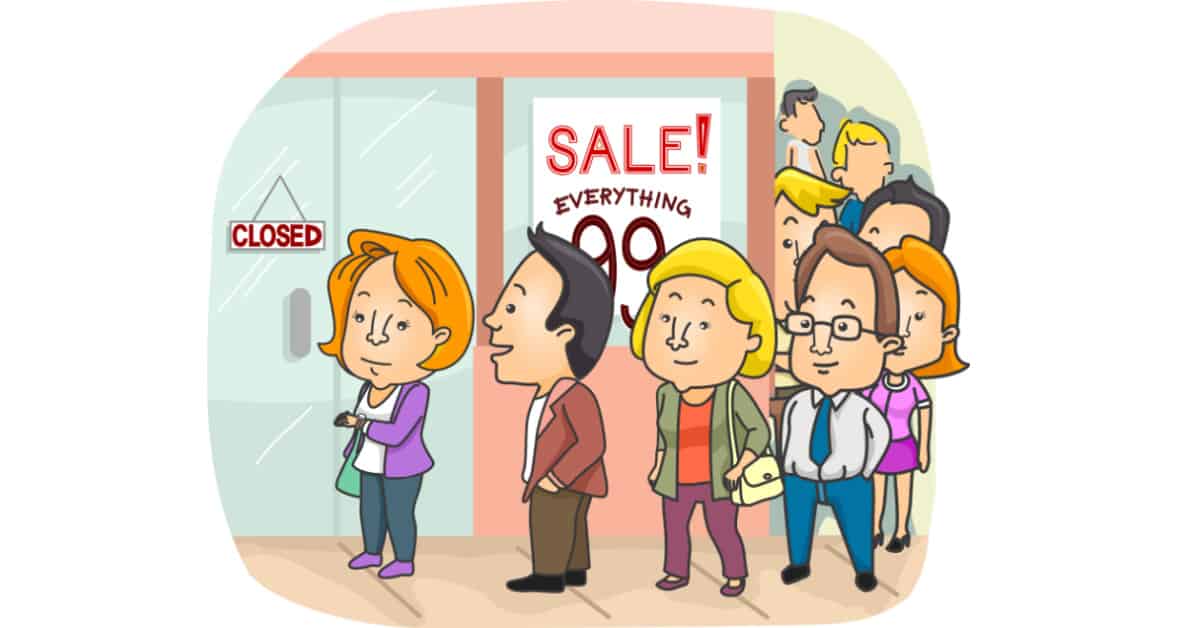 If you go to a thrift store at opening time in my area you’ll find a 30-person line, mostly made up of retirees.

How early they get there I don’t know but I do know that some of them literally run through the thrift store and it’s pretty empty by the time I get there 15 minutes after opening.

So who is right? Are they at thrift stores at the opening because it’s the best time for great scores?

Well, it turns out there is a bit more to the answer than even I thought. Having thrifted for many years I can finally shed some light on how you can figure out the best day and time to go to a thrift store!

The best overall time to shop at a thrift store is Tuesday morning about 30 minutes after opening or right on opening on discount days. Both allow you to take advantage of the donation and stocking schedule that most thrift stores have.

Is Thrifting A Skill Or Just Luck?

First off, let’s get this out of the way: there is a small amount of skill involved when it comes to thrifting.

However, that skill mostly revolves around choosing the right thrift store and then recognizing valuable things/brands when you see them.

It doesn’t involve being crazy and trying to beat everyone else. There are plenty of great finds.

The most important factor that decides whether you’re a successful thrifter or not is simply the amount of time you spend in thrift stores. Spending a lot of time will trump being lucky every time.

But what if you only have a bit of time because you actually have a job like a normal person?

Well, then here’s the game plan…

If you can only go thrifting on one day, go on Tuesday.

Tuesday is the best day to shop at thrift stores for many reasons: the staff have had a chance to sort and price the weekend donations, you’ll miss the crowd that thrifts on Monday, and you’ll be able to take advantage of the things that were stocked on Monday but were missed by the early crowd.

The quality of the thrifting typically wanes later in the week unless the thrift store has a unique stocking situation.

Most thrift stores get 80% of their donations from Friday to Monday and the new stuff on the floor peaks on Tuesday.

However, you should simply ask someone at a thrift store if you want to know more. For example, a thrift store near me gets a new truckload of stuff from their boutique store on Thursdays, making Thursday afternoon and Friday morning the best days to thrift.

The precise details may differ but nearly every thrift store has a discount schedule. For example, Savers has a half-off color every week and Goodwills in my area has a day where everything of a specific color is only $1.

On those days, being the first person through the door is the best idea as everything is already stocked and you want to be the first one to grab it.

Best Time Of Day To Shop At Thrift Stores

People who are at thrift stores first thing in the morning act like there have been staff at the thrift store all night long stocking the shelves.

Spoiler: the staff go home when the store closes and the items on the shelf will be roughly the safe as the day before.

Most thrift stores stock throughout the day.

In my opinion, the best time to go in about 30 minutes after the store opens. The early crowd will have cleared out and the staff will continue to bring out new stuff.

Stocking at the Savers and Goodwill near me typically happens between 30 minutes before opening until around lunchtime. Anytime during that interim, you’re there you’ll be able to see some new racks come out.

The worst time to shop at thrift stores, on the other hand, is during the average lunch break (12:00-1:00ish). It will be way more crowded, there won’t be much new inventory, and the morning crew will have cleaned out a bunch of stuff.

Just remember that every thrift store is a bit different and you’ll want to ask exactly how they stock things to create your plan of attack.

3 Ways To Game The System

If it’s not possible for you to be at a thrift store at one of these opportune “off” times, don’t worry, you can still do well.

So let’s go through a few of the methods we used to “win” at thrift stores when my wife and I were both working 60 hours a week and could only squeeze in the only odd trip now and then.

If you frequent independent thrift stores, making friends with the workers can net you some huge returns (plus it’s just cool to be nice…).

I was waiting in line once at a mom-and-pop thrift store and a lady in front of me was buying a Lululemon hoodie that she had found. I was already pretty jealous but imagine how I felt when the checker said, “Oh! I remember last time you said you loved this brand and always looked for it. I saved a bunch of things in the back for you!”

Now, I’m not saying that you should go to the extent of asking employees to save things for you, but I have had employees tell me that there were things in the go-back carts I would like or to check out something that was just put in special collections.

2. Be Extra Thorough In One Or Two Areas

Most people who go thrifting just casually stroll down the aisles hoping that something will jump out at them.

I’ve watched people who are “looking for t-shirts” but literally only pull out one of two to look at on the entire rack before moving on. Like, how can you possibly expect to figure out if there’s anything good in there?

The secret sauce of thrifting success is to be extra thorough. If I’m looking for t-shirts I will look through every single one. Because things are often moved around and put in the wrong sizes I will check everything on the rack.

I was at a thrift store recently when a new rack of men’s clothes came out. A reseller beat me over to the rack and flipped through everything at lightning speed, taking a few Nike shirts.

I decided to go through the rack anyway piece by piece and found a $4,000 Kiton cashmere blazer. It didn’t fit but I was happy to sell it on eBay myself.

3. Check The Go-Back Carts/Try On Rack

Some people who are shopping at thrift stores are looking for anything that has value so they can flip in on eBay or Poshmark. Pretty much everyone else is looking for something in their own size.

I saw a lady at a thrift store who had found a super nice jacket that was new with tags. She was calling several family members to see if the jacket would fit any of their kids. When she couldn’t find anyone, she sadly put the jacket back.

You can shortcut going through every rack if you simply check the rack where people put things after trying them on. People find great things and, if they don’t fit, they don’t buy them.

Maybe you’ll get lucky and they’ll fit you!

Probably the biggest lesson I would hope that anyone wanting to know the best time and day to go thrifting is: there is plenty for everyone.

There’s no need to be a crazy vulture that hovers over every new cart and snatches things from other people. There will always be another cart coming out and you can have a great time at a thrift store even if you don’t beat everyone.

Oh and, if you’re a reseller, remember that some people actually want the things for their own home and they take precedence over you.