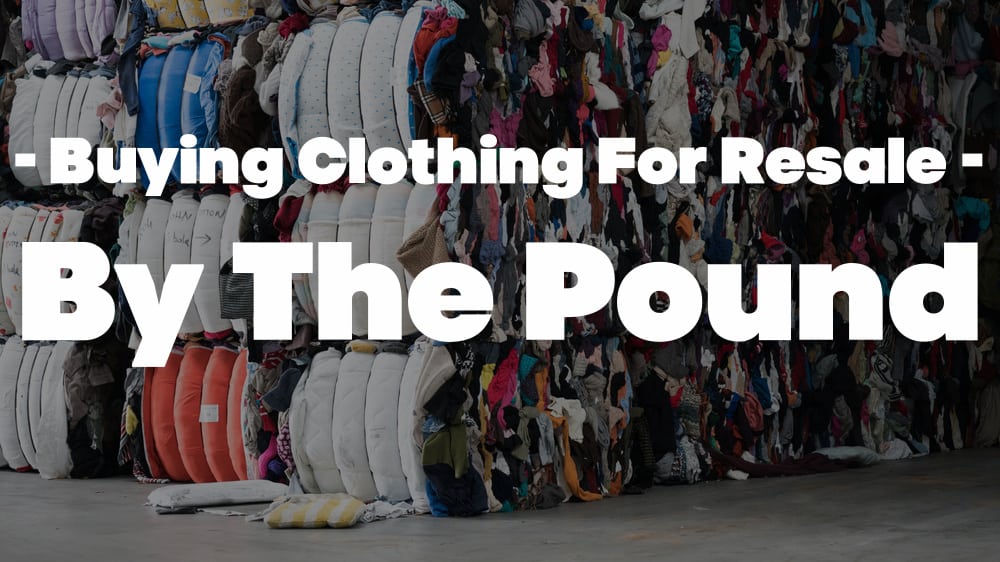 The first time I went to the Goodwill Outlet I was over the moon. The idea of paying $.99 per pound for anything I could find sounded simply too good to be true.

I scratched my way to the front of dozens of bins and soon filled my cart. Unfortunately, I only had 60lbs of stuff in my cart which meant that I had to pay $1.39 per pound instead of $.99

Despite having several pairs of shoes, lots of jeans, a backpack, a dozen shirts, some toys, and other miscellaneous knick-knacks I didn’t quite make it. By the time I had sold all of my finds on eBay I had made well over $500.

However, figuring out where to buy clothing by the pound isn’t as easy as it sounds. There are the typical thrift stores that sell by the pound )which everyone knows about) but some of the best deals come from places you’ve probably never heard of.

There are thrift stores that sell vintage clothing by the pound, curated items by weight, and even hard goods and electronics by the pound.

So how do you find one near you? Well, here are the options!

166 Thrift Stores That Sell Clothing By The Pound

Let’s face it, dipping into your gas budget to get to a thrift store kind of defeats the point of trying to save money. Here is the biggest list on the net of where you can buy used clothing by the pound close by you!

The Goodwill Outlets are probably the best-known thrift store where you can buy clothing by the pound.

The Outlets are known fondly as “the bins” because all of their merchandise is placed in rolling blue plastic bins that you’ll need to dig through to find your treasures.

With over 150 outlets sprinkled throughout the United States, odds are that there is at least one near you.

With the bins can be hectic (because of how many people are there) they are a good place to go when you’re first looking to buy clothing by the pound. They typically have a ton of inventory on the floor and are constantly bringing out new bins for people to search through.

–> Find A Goodwill Outlet Near You

If a thrift store fails to sell its clothing, they typically do one of three things with it: throw it away, recycle it, or donate it to a shelter or similar charitable organization.

Savers decided to bypass those three options and try to make a bit more money off of their stuff. Savers has opened a select few stores where you can buy items by the pound.

These stores are typically set up to run exactly like a Goodwill outlet and are priced similarly.

These stores can be difficult to find and I’ve only visited once (in Las Vegas). The best way to find one nearby is probably to call your local Savers and see if there is one in the area.

3. Salvation Army By the Pound (2 Locations)

Several Salvation Arms locations either offer a by-the-pound service or reserve a day a week when they change their regular pricing to a “by the pound” approach.

Salvation Army By the Pound stores function similarly to the Goodwill Outlets. They receive donations from surrounding stores and then dump them out piecemeal for people to go through. The main difference is that they usually dump them out of tables or the ground.

While these stores are few and far between, here are the ones that I know of:

Flamingos is a unique experience in a thrift store.

They offer a curated experience and sell exclusively vintage clothing by the pound.

They have their “experts” comb through bulk clothing and price them by weight.

Flamingos started in the UK but has expanded to the U.S. and is looking to open more stores than the three they currently have open.

The three you can visit now are located at:

If you’re ever trekking through Idaho, be sure to check out one of the thrift stores operated by the Youth Ranch. The Idaho Youth Ranch provides residential care, emergency shelter, therapy, job services, adoption help, and more to both kids and families.

To fund their operations they have both regular thrift stores and the following pay-by-the-pound locations:

Buy The Pound in Kansas City is one of the cheapest places to buy clothing by the pound that I’ve heard of! You can purchase clothing for as little as $.39 per pound which makes most items less than $.50!

In addition to getting a great deal, you get the satisfaction of supporting the owners: Disabled American Veterans!

If you like the idea of buying clothing by the bale but can’t afford it, The Garment District has you covered. Every morning they open a bale of used clothing (850lbs worth) and let shoppers have it.

While there is (regrettably) only one location, you can find The Garment District at 200 Broadway, Cambridge, MA 02139.

St. Vincent de Paul thrift stores are relatively well known and you likely as not visited one. However, did you know that they gather all of their unsold items and sell them by the pound at a single location?

Found By The Pound is kind of an oddity in the bin world. They do sell all of their clothing by the pound but it is all hanging and organized like a regular thrift store. They specialize in “like new” clothing that they buy in bulk from all over the United States (they don’t take donations) and price it all at $3 per pound.

So, long story short, the best answer to the question of where to buy used clothing but the pound is simply: thrift stores near you.

If there’s not one near you, however, you might just have to plan a road trip! We didn’t have one in Utah for the longest time and only got to buy clothing by the pound when we visited family in Las Vegas, 6 hours away.

If you don’t want to drive and don’t feel like dealing with the hectic atmosphere of the bins, however, there are other options.

If you want to take a more relaxing route you can avoid the adventure and order clothing by the pound (or by the bale, box, etc.) straight from your computer.

Where To Buy Wholesale Used Clothing By The Pound Online

There are very few places online (actually, none that I know of) that let you select a pound limit of clothing and pay for your selection.

Rather, they offer bulk clothing in box or pound increments that you can either buy outright or bid on.

As we’re eBay sellers, bidding is our preference.

Some Goodwill Outlets simply have too much inventory to sell through their normal bins system and, instead, sell clothing off in bulk. From Bluebox, for example, you can buy clothing that is curated into boxes or buy an entire bale of unsorted clothing to dig through you just have to pick it up).

We recently bought 5 lots from Goodwill Bluebox. Check out the items we got and our full Bluebox review here.

Thredup is a great option if you want to avoid getting unsellable clothing. You can buy “rescue lots” that are pretty much clearance or overstock lots from their own selling platform.

While we haven’t bought a rescue box (yet) many resellers have had good luck with them!

The real problem is finding small lots of used clothing. Most sellers consider “bulk” used clothing to be at least one semi-load or a shipping container full.

Once you do find a small-scale bulk seller be sure that you’re buying unsorted items. Many unscrupulous sellers will cherry-pick items or even sell the duds that they haven’t been able to sell themselves.

Pros and Cons of “By The Pound” Thrift Stores

Best Items To Buy By The Pound

When I’m in the heat of the battle at the Goodwill Outlet or another by the bound store it’s easy to forget that not everything is actually that cheap.

In fact, many items are cheaper to get at a regular thrift store.

One of my first times of buying clothing by the pound I grabbed a leather trench coat and a pair of work boots to resell. The boots weighed just under 5 pounds and the coat was just about six.

The best items to look for, then, are items that hold high value relative to their weight.

Some of my favorite clothing items to buy by the pound include:

I typically look twice at any item over 3-4 pounds as it would be cheaper to source a similar item at a thrift store.

Also of note: don’t get too excited and start chucking clothing and items in your cart without checking them over first. Many items in pay-by-the-pound stores are items that failed to sell at a regular store. Because of this, many of them have significant flaws that aren’t apparent at first. Look for broken zippers, period stains, popped seams, nasty pockets, weird hemming, etc.

102 Clothing Brands To Buy By The Pound

The first time you visit a store that sells clothing by the pound, let go of your expectations. Yes, there are awesome things to be found but it takes work, luck, and patience in dealing with crazy people.

If you have an idea of the things you’re looking for (either for yourself or to sell) you’re much less likely to leave empty-handed.

Here are some of the brands that we routinely find and have luck flipping from the bins and other by-the-pound stores:

We’ve been selling on eBay for more than 6 years and are still learning new brands every time we thrift. So use the list above as a jumping-off point and then visit a few of our other guides to get a flavor of the kinds of things that sell well online:

Buying clothing by the pound is one of the few things in life that is everything you imagine it to be. Find a spot near you to go and spend the time necessary to find the gems.

Just don’t do what I did and go crazy, thinking that you should simply buy everything because it’s so cheap.