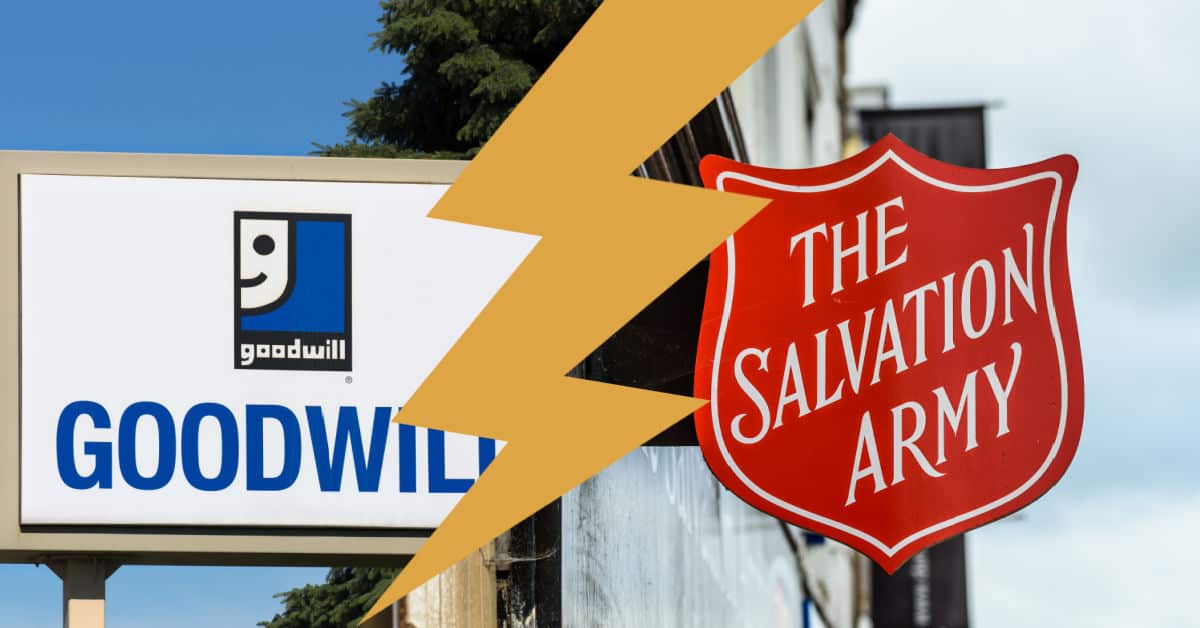 For many people deciding where to thrift (or donate) they are left deciding between Goodwill and The Salvation Army.

Because of the accusations leveled at many thrift stores over the past years (okay, mainly at Goodwill) many people (including me) are left wondering which is better.

Should you donate to Goodwill or The Salvation Army?

Which should you shop at? Or maybe you should boycott both?

Well, let’s take a look at how Goodwill and The Salvation Army stack up across the board so you can make an informed decision.

But first, take a second and vote in our poll so we can see how shoppers’ perceptions add up!

Both Goodwill and The Salvation Army make money by selling donated goods in their thrift stores.

They accept donations of clothing, furniture, household items, and more from individuals and businesses. These items are then sorted and sold in brick-and-mortar stores (or online in Goodwill’s case).

However, that’s not to say that they operate in a similar method. In fact, their different methods of operation are one of the things that set them apart.

Both stores seek to promote their stores and sell as many goods as possible because, the more money they generate, the further they can advance their respective missions.

Goodwill is a chain of thrift stores that sell donated goods to raise money for their nonprofit mission. They are known for their big blue sign and their slogan, “Donate Stuff. Create Jobs.”

The main drive of Goodwill is to use the money that it generates from donations to fund its programs and services, namely providing job training and placement assistance for people with disabilities or other barriers to employment.

Unlike The Salvation Army, Goodwill is not a large singular organization. Each store or locale is privately owned and simply follows the same operating procedures to achieve the same mission. This means that Goodwill stores can vary slightly from place to place as they do not have a CEO overlord or shareholders to look out for.

This further distinguishes Goodwill as it is not associated with any religion but, in essence, is owned by the communities they are located in which allows each store some license to fund and support causes important to the community.

The Salvation Army is a thrift store at heart but uses its funds to support a biblically driven mission to “bring salvation to the poor, destitute, and hungry by meeting both their physical and spiritual needs”.

To achieve this, The Salvation Army operates as a single entity owned by the Protestant Church and headquartered in London England.

The funds that are generated by The Salvation Army are used to operate their charity shops, open homeless shelters and centers for disaster relief, and provide humanitarian aid to those struggling in developing countries.

How Donations Are Handled

Both Goodwill and Salvation Army are 501(c)(3) corporations which means that they operate as non-profits and donations to either are tax deductible.

This makes donating to either The Salvation Army or Goodwill an attractive option for people looking to declutter their homes or businesses while also getting a tax break.

The main difference here lies in how Goodwill and The Salvation Army price and move their inventory.

Since The Salvation Army is focused on providing goods to the needy, prices are often lower to make sure their goods are accessible to everyone.

Goodwill, on the other hand, acts as if they were trying to maximize profit so they have more funds to further its job opportunities. This has led them to increase their prices in-store, sell their best items online, and cut costs in other ways to increase revenue, all of which have led to criticism.

Donating to either Goodwill or The Salvation Army will mean that your old items are going to a good cause, you’ll just have to decide for yourself whose mission and practices resonate with you more.

When it comes to thrift stores, the shopping experience is more heavily dictated by the individual store than the name on the front of the building.

I’ve had good experiences (and bad ones…) at both Goodwill and The Salvation Army.

While it’s possible to get lucky on any given store on a given day, the quality of the merchandise is usually dictated by the area the store is located in.

Having said that, Goodwill is typically located in more affluent areas so, when we’re looking for quality, we find it more reliably at Goodwill.

We’ve been flipping thrift store items online for more than 5 years and hardly ever pass up a thrift store.

However, in our area, Goodwill gets the bulk of the donations and is a better source of sellable inventory.

If you are on a budget and are shopping for yourself, stop at The Salvation Army first and see what they’ve got for you.

The Salvation Army has been relatively true to its purpose and free from any sort of sandals or accusations. They are rated highly by most charity watchdogs.

Goodwill, on the other hand, has been the subject of many controversies despite the good that they do.

Among the more prominent issues commonly cited are:

Personally, none of the accusations leveled at thrift stores are enough for me to avoid them. Do I wish they had better business practices? Sure, but I just need some cheap sneakers.

While Goodwill and The Salvation Army are different in many respects, they are both thrift stores that do much good in the communities that they serve.

While I might choose one over the other if I had to, I will continue to shop at both and donate to whoever gives me the best coupons! Your mileage may vary though!