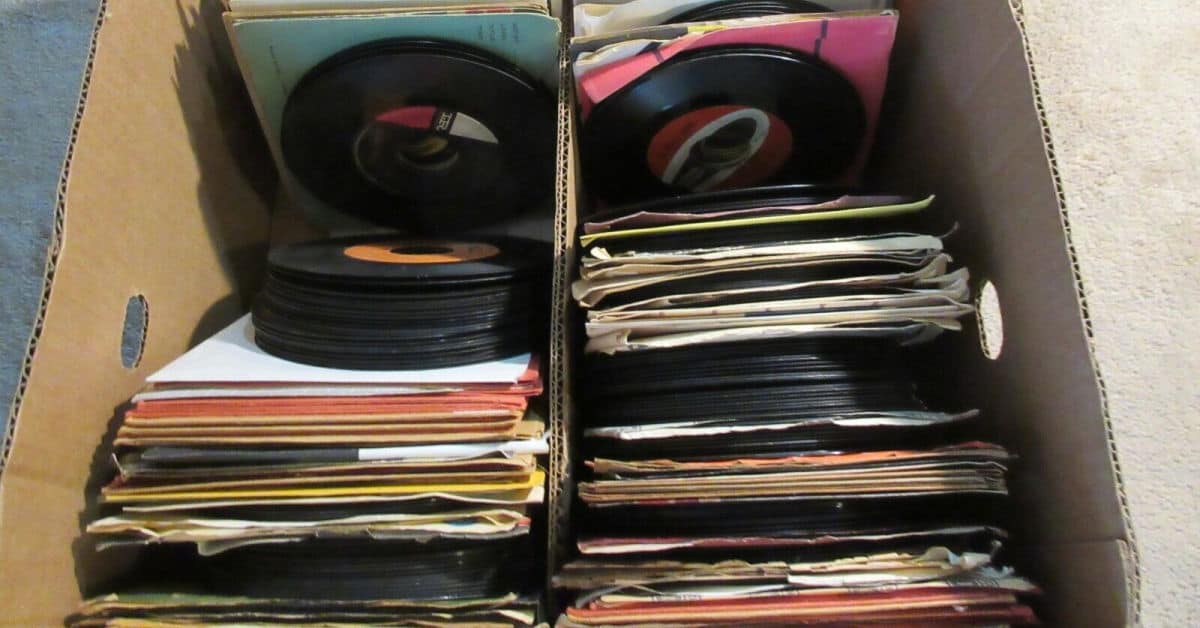 For some reason, when we tell people that we sell on eBay (especially if we include the word “vintage”) they always respond, “Oh, like vinyl records and stuff?  I have an Elvis record that I’m sure is worth a bunch of money….”

Well….we do sell “records and stuff” but I hate to tell you that your Elvis record is probably worth very little.

In fact, media is one of my favorite things to flip from thrift stores. While everyone knows that you can sell records on eBay, not many people are aware that there are dozen other types of media that are profitable (not to mention easier to test and store…)

My 5 Favorites Types Of Media To Sell On eBay

Despite the popular tales which abound both from the internet and your Great Aunt Tessy, most vinyl records are nearly worthless on eBay.

Maybe people were able to make a living selling vinyl records on eBay 10 years ago but, today, people hoard their records thinking they’re sitting on a goldmine when they’re actually just sitting on a bunch of vinyl.

Now that isn’t to say there isn’t still money to be made….but you have to be careful!

What To Look For

CDs are plentiful in any thrift store.  Unfortunately, I absolutely detest looking through CDs (as they’re quite low profit) and spend about 5 minutes on the section.  We scan each row, pull out CDs that are either still sealed or fat (meaning special editions or boxed sets).

From our experience, there may be other valuable CDs but unless you’re extremely knowledgeable on the subject (or ungated to sell them on Amazon), it’s not worth your time.

CDs To Look For

With a few notable exceptions, 8-track tapes are not worth picking up.  Since 8-tracks were only around for a little while, artists during the era also released their albums on either cassette tapes or CDs.  There are therefore very few rare 8-tracks.  This, coupled with the fact that very few people still have 8-track players results in very low demand for 8-track versions of albums.

8-Tracks To Look For

Tapes are among the funniest pieces of media for me to sell as, growing up in the 90s, tapes were nostalgic and “cool”.

My parents had a suitcase-style cassette-tape holder that I wasn’t allowed to touch so maybe that’s part of the reason I enjoy digging through stacks of tapes so much.

However, having said that, the used cassette tape market isn’t large. It’s mostly fueled by nostalgia, collectors, and people with vintage cars so keep that in mind when figuring out what types of tapes to source.

Tapes To Look For

Quick Tip: Tapes By The Pound

If you have a Goodwill Outlet near you (or another thrift store that sells by the pound), be sure to always grab tapes out of the bin.  We separate the tapes by either genre or artist and sell them in large lots.  This is an easy way to turn $100 into $1,000 or more if you’re patient!

So, what makes the difference?

Age and rarity are two of the biggest factors that affect the value of an old VHS tape. Generally speaking, the older the tape is, the more valuable it will be.

Of course, age and rarity aren’t the only factors that affect value; the condition is also important. A tape that’s in good condition will be worth more than a tape that’s in poor condition and tapes that are unopened are the most valuable of all!

VHS Tapes To Look For

I’ve addressed this before but I have to say it again: no, your Disney VHS tapes are not worth thousands of dollars. Figuring out where are how to sell Disney VHS can usually ensure that you get some money for them but they are not as valuable as recent hysteria has made them out to be.

If you want to run a profitable eBay store selling media then it really comes down to persistence and patience. You’ll want to spend your time looking up as many items while sourcing as possible so you can get an idea of what sells and for how much.

While some of it is just dumb luck, it is possible to get better over time and consistently find media that will make you a profit on eBay. Good luck!