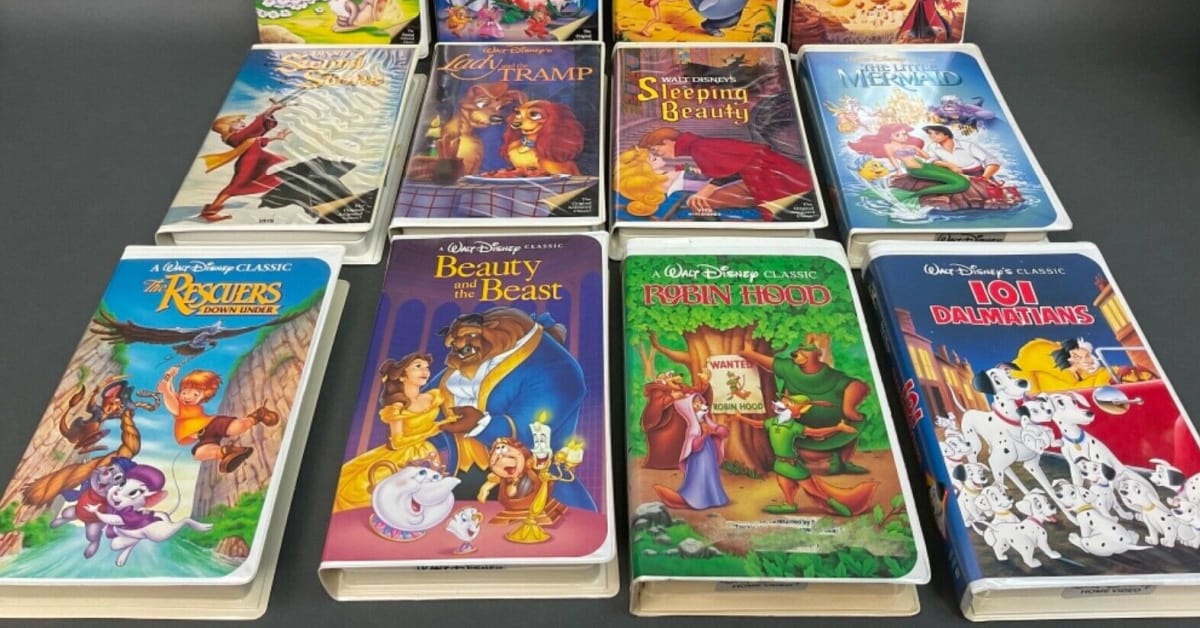 We’ve all seen the hype articles about Disney VHS tapes.

Who would have thought that your childhood tapes could sell for thousands of dollars online?

Well, no one actually thought that until someone wrote the clickbait titles. Mostly because there’s no truth in the matter.

That’s not to say that you can’t sell your Disney VHS tapes though!

Selling them is just a matter of finding the right platform to list them on and pricing them right!

How Much Are Disney VHS Tapes Worth?

In general, Disney VHS Tapes are worth $3-5 in very good condition. The varies based on the title, condition, and rarity with sealed copies being worth the most.

This may be a bit of a shock if you’ve seen headlines about Disney VHS apes selling for hundreds or thousands of dollars but we’ll get to those sales in a bit.

There are a few things that will increase the value of your tapes beyond average:

So, despite what you’ve heard, Disney VHS Tapes are not in high demand. They were made in huge numbers until very recently and just about everyone has them (or had them) in their home.

Because they’re not hard to find, the key to getting the most money for them is to offer them to the largest audience possible.

So if you’re trying to get your Disney VHS Tapes to sell, here’s where you should list them!

With around 160 million active users, eBay has the customer base you need to sell just about anything.

eBay is an excellent place to sell VHS tapes whether they’re rare or common.

If they’re common, you have people cruising for great deals that will snap them up and, if they’re rare, you have collectors that are willing to pay top dollar for the rare or unusual.

If you’re new to the online selling world (or you’re one of those people who refuse to sign up for eBay’s Managed Payments) then Mercari is a very good option. Mercari is very similar to eBay in that they allow you to sell just about anything you can think of to a large audience of people. What’s more, media is one of the fastest-selling categories on Mercari.

I prefer eBay for selling things like vintage Disney tapes as eBay has better filters and search functions but you should e able to move them on either platform.

If neither eBay nor Mercari is a good fit for you, there are a ton of alternatives to eBay where you can sell your items.

If you have something particularly valuable or unusual, crossposting your items (listing them in more than one place) can also be a great way to get eyeballs onto them and increase your chances of a sale.

Unless your Disney VHSs are unusual high-dollar items your best bet may be to sell them locally.

While you won’t get as much money if you sell them on Facebook Marketplace or Craiglist you will at least avoid paying fees and having to ship the items like you would have to if you sold them on eBay.

For the past several years there has been a huge amount of hype surrounding Disney VHS tapes with a “Black Diamond.”

The general perception is that these are more valuable because they are unusual or rare. Unfortunately, that’s not true.

You can go on eBay right now and buy hundreds of “Black Diamond” Disney VHS tapes for $10. So what’s the difference between those and the ones that sell for thousands?

High-dollar Disney VHS sales on eBay are typically never paid for by the buyer or are being used to launder money.

I won’t post specific usernames on here but go check out a few of these overpriced completed sales. On every one that I looked at the seller had registered a new account the same day they sold the tape. They never listed anything else and received no feedback from buying or selling.

Add in the fact that there were dozens of completed sales reusing the same pictures and you can tell that something stinks.

I have listed identical VHS tapes using the “Sell Similar” function as these expensive sales and have had zero interest.

The only conclusion I can come to is these are not legitimate sales. If you have Disney VHS tapes that you think are super valuable for some reason, by all means, go ahead and list them. Just don’t be surprised when they don’t sell.

If you’re a bit disappointed by the value of your Disney tapes, don’t be! Not only are they still worth a bit of money, but there are tons of things you can sell on eBay which are easy to find and flip.

So sell those VHS tapes and then get out there and find some more stuff to resell!