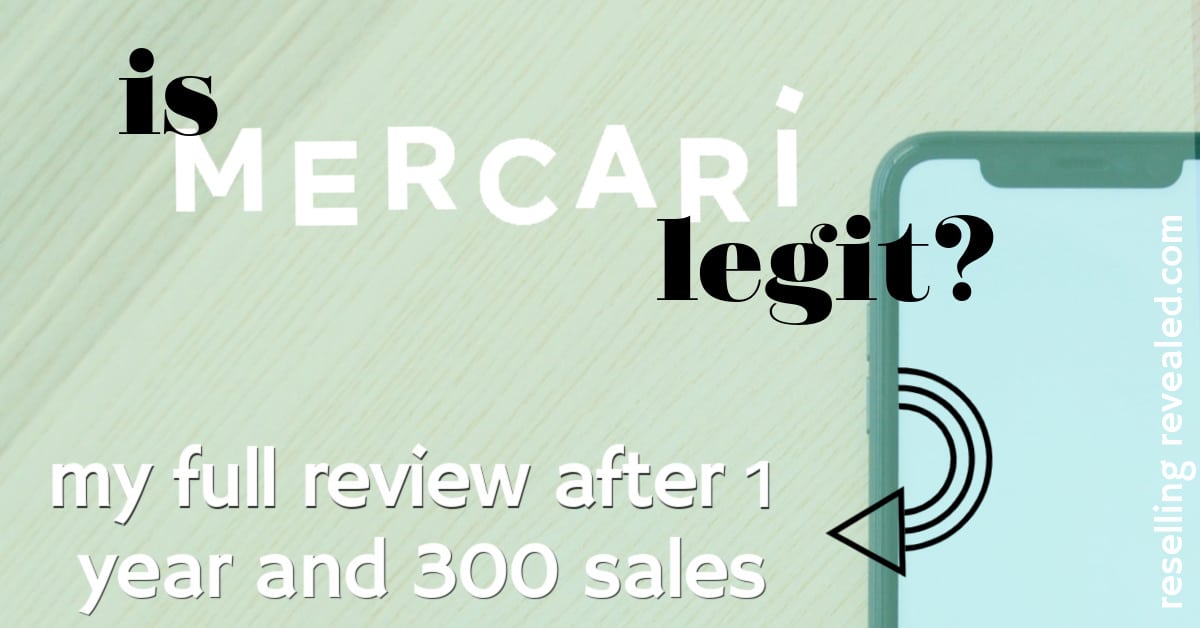 It seems like every other day there is a new platform popping up where you can sell your used clothes or other items for sweet sweet cash. One by one, these platforms seem to fade from the forefront. In fact, having been a full-time reseller for more than 4 years I have found that less than half a dozen platforms have had any staying power whatsoever.

Those concerns kept me from utilizing Mercari when it first came out. However, given the rapidly changing climate at eBay (such as their managed payment system), I decided that it would be in my best interest to diversify.

So about two years ago I spent a couple of days and crossposted almost 500 of my eBay listings onto Mercari. (this was before I heard about ListPerfectly so I did it manually). The following rush on sales (and actually getting paid) gave me the confidence to consistently sell on the platform. But before we get to how it all works and my full thoughts, most Mercari reviews come to the same conclusion.

Mercari is a legitimate business with yearly sales approaching one billion dollars. Despite low ratings from the BBB (1.12/5 stars) and other crowd-sourced review sites, Mercari has an overall “A+” rating. The most common phrase mentioned in negative reviews of Mercari is that it is possible to be scammed as either a buyer or a seller.

Now, if you’re considering just getting into buying or selling on Mercari, you’re in luck. If you sign up through my link (on a mobile device), you’ll get $10 off your first order and an extra $20 bucks when you sell your first $100 worth of goods!

How Mercari Works For Sellers

Mercari works very much like any other platform. If you are experienced in selling on eBay or Poshmark it won’t be a difficult addition or transition.

However, if you’re new to selling items online, here’s how it works:

It may sound a bit imposing at first but I can promise that you will get super comfortable and quick after just a few listings. Mercari makes it super easy for new sellers to get on board and will walk you through the entire process.

Now, if you’ve read many Mercari reviews online, you’ll have come across some pretty angry people. Unfortunately, this is the case for just about any company’s review section. The people who have had negative experiences are apt to yell the loudest.

However, Mercari has a 4-star rating on TrustPilot (compared to eBay’s 1.4 stars and Poshmark’s 1.6)

Because I think Mercari is a great opportunity that you should thoroughly consider, let’s take a look at some common concerns that I’ve seen on Mercari reviews and address them. After reading almost 1,000 reviews, here are the common themes:

Concern: Customer service is difficult to contact, difficult to deal with, and does not provide adequate solutions.

To some extent, yes. Many people have had difficulty dealing with Mercari’s customer service and have been dissatisfied with the results. I would say that having issues that lose you money is a rare occurrence. I have dealt with customer service 4 times in 300 sales and have never had an issue with them. If you have an issue, I would recommend contacting them via the app instead of my phone as that seems to yield better results. In every case, my issue has been solved and I’ve received an email letting me know the outcome within 24 hours.

“Fees, fees, fees. By the time I got my money, there was nothing left. Why can’t they just charge a single flat fee like everyone else?“

Concern: High fees that are charged in multiple ways.

No. Most major selling platforms have fees within a couple of percent of each other (Poshmark being a notably high exception). Many people complain about fees and say they’re going to start their own site or sell somewhere else…good luck. I will gladly pay 10-15% for the chance to show my items to millions of hungry buyers who are literally looking for someone to give their money to.

Mercari does not have any listing fees and only charges fees to transfer money to your bank if you want it instantly.

“…this is the site you go on when you want to sell something that’s busted, old, or missing pieces, and you want the buyer to have as little control over their return as possible.“

Concern: Sellers are dishonest about the condition of their items and sell things that stink, are broken, fake, etc.

Yes. This concern, however, is not limited to Mercari. Most platforms are rife with bad actors who are trying to make a quick buck and game their system by either outright scamming people or by over-selling their products.

This problem is particularly significant on Mercari as the return window is short.

Scammers count on buyers either not rating them within 3 days (which closes the option for a return) or not returning the item within 10 days. If either of those things happens, the sellers can get away with their ploy 100% and it won’t affect their ratings.

To combat this as a buyer, I would be very wary of buying expensive or luxury items on Mercari. I sell expensive items that I have on eBay and am more comfortable buying there as well. I have heard of several people getting knock-offs from Mercari (which also happens on eBay, to be fair) but we have bought dozens of authentic Louis Vuitton items off of eBay to resell with no issues.

As a seller, you’ll also face potential scams. People will break an item and return it, swap out your new item for their well-used one, etc. Mercari has a tendency to side with the buyer in situations like this (often not even contacting the seller). I avoid this situation by selling high-dollar items on eBay where I feel I have more protection.

“… return was a nightmare. Luckily I requested it within three days. If not I would have gotten screwed even worse.”

Concern: Returns can be difficult for honest buyers and a source of frustration for honest sellers.

Yes. When I first started buying on Mercari I told myself, “Wow, I hope I don’t ever have to return something!” I haven’t. Mainly because I don’t buy things that I think could have issues.

However, many people on both sides of the fence (buyers/sellers) have had issues with returns on Mercari. You have a specific window to ask for a return (3 days) and to mail the return (10 days) and if you’re outside of it then you’re just out of luck.

With Mercari’s after-thought-of-a-return-system does work I would make every effort to avoid using it as a buyer. As a seller stick with selling items on Mercari that won’t break you if you have to refund them.

So do the negative Mercari Reviews have merit?

Yes, of course, they do. Mercari is a newish platform and, in my opinion, has not made changes fast enough to keep pace with the influx of users. I don’t think that these pain points are significant enough to invalidate it as a money-making platform but it should probably change the way you approach it both as a buyer and as a seller. To make it short: just be careful.

The Pros Of Selling On Mercari (According To Me…)

Now that we’ve hammered out some of the major concerns that people (including you) might have about selling on Mercari, we should probably come back to the center and discuss some of the good things that the platform has to offer.

So is Mercari legit? Heck yes! Should you sell your items on Mercari? For sure! Should you entrust them with your livelihood? Ehhh…better not.

I think that Mercari is a valuable platform for selling you used crap. If you’re simply looking to move a couple of old things out of the garage, it would not be my first choice. I’d go with OfferUp or Facebook Marketplace.

However, if you’re a reseller, someone who has unusual types of items to sell, or simply doesn’t mind shipping stuff. Mercari is an excellent addition to your arsenal.

I know this article only touched briefly on the “How To Succeed on Mercari” front but don’t worry, we have lots of other articles for that! Let’s hit a few more points that people commonly wonder about and show you where you can learn more:

2 thoughts on “Is Mercari Legit? My Review & Thoughts After $20k in Sales”