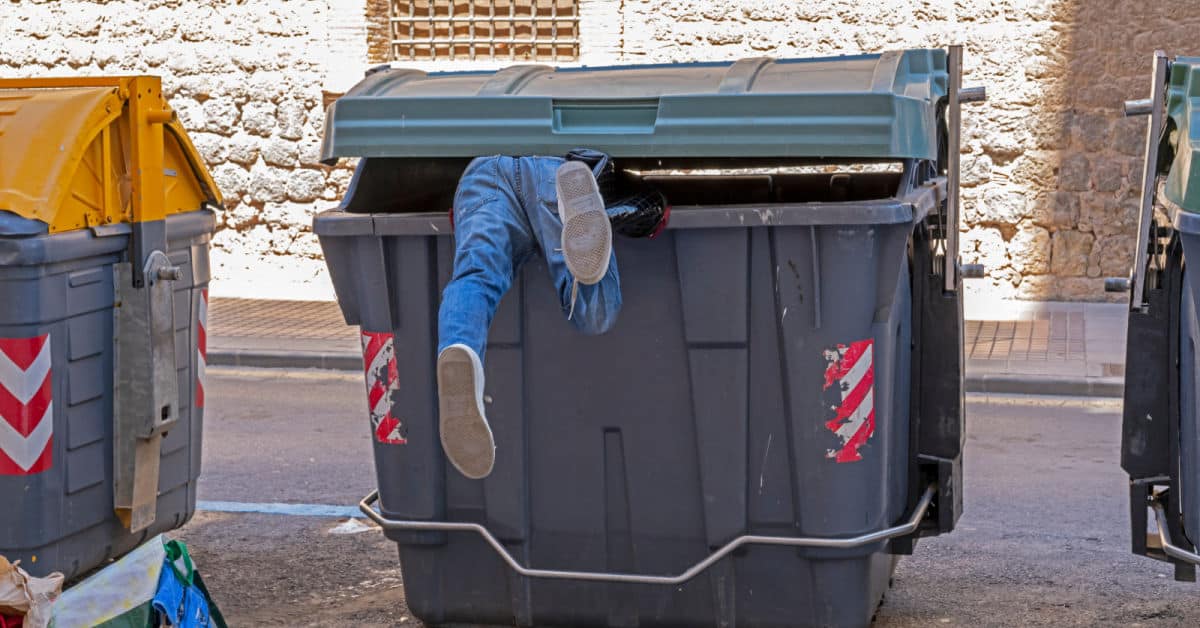 For several years after my wife and I were married, we had to make money in whatever way we could. Medical debt and student loans were crushing us so we tried dozens of different ways to “make quick money”.

Spoiler alert, pretty much none of them worked.

However, the two that really stuck and allowed us to get out of our position and eventually build a six-figure business were: flipping thrifted items and dumpster diving.

In most of the developed world, there is an appalling amount of waste. Both people and corporations throw billions of dollars worth of new goods into dumpsters every year.

What better way to help the environment that by helping yourself to some of these dumpster goods and turning them into money for your family?

Unfortunately, making money from dumpster diving is not quite as straightforward as you’d hope. Many divers become hoarders as they are either unable or willing to sell their finds.

That was never a problem for us. We saw every dumpster find as a small paycheck and turned it into money as fast as possible.

So, if you’re looking to make a profit by dumpster diving, here are our tried and true tips for making it happen!

What Kinds Of Things Can You Sell From Dumpsters

Electronics are probably one of the most consistent dumpsters finds that are still worth selling. Many people don’t take the time to sell or donate their used items so they just chuck them in the trash.

Look for the obvious finds such as laptops or phones but also pick up small things like converters, tape players, and pretty much anything with a cord.

The extra bonus of electronics is that they are typically clean or easy to clean with a wipe or sponge.

The most consistent find in any dumpster is sellable scrap.

Those who know what they’re doing can make thousands of dollars per month just dumpster diving for scrap and selling it. What’s even better is that scrap is about the easiest thing to sell, you just sort it out and take it to the scrapyard.

In addition to steel, look for aluminum, copper, brass, cast, and just about anything else metallic. You’d be shocked how many things have a salvageable amount of metal in them.

There are people who make a full-time living just flipping furniture and dumpsters are a great place to find flippable candidates.

Furniture is often left on the ground near the dumpster so it’s easy to inspect and look up when needed.

The best furniture to resell is all-wood or plastic options that don’t have the ability to hide pee stains or lice. Avoid mattresses like the plague and leave most cushioned items unless they’re sparkling clean or you’re willing to have them professionally cleaned.

I used to pass on all dumpster clothing until I found a pristine pair of North Face snow bibs and flipped them on eBay the same day for $150.

I figured there was no reason that people would throw away decent clothes (dumb of me, I know) until my wife informed me that people who get new wardrobes every season often just check their old ones.

If you’re worried about the cleanliness of clothes, take a tote or plastic bag and put all cloth items straight into it until you can wash them. This will put you a step ahead of Goodwill which doesn’t even wash the clothes that they sell.

Art and small nick-nacks are common dumpster finds that are easily turned into a couple of dollars.

My friend found a Lladro figurine in a dumpster which they sold for around $200 but most of the small things I’ve found have been good yardsale fodder.

If you’re in a city or other high-construction area then open-top dumpsters can be a veritable gold mind.

In general, construction is a high-waste activity, and overages are often thrown away rather than resold.

I’ve pulled out hundreds of sheets of plywood, unopened cases of caulk, nails, electrical wire, and just about everything else that is used in home or commercial construction.

The best thing is that you can often just turn and sell the same stuff back to a different construction crew in a different part of their project.

It’s shockingly common for a shop or dealership to order the incorrect part for someone’s car and then just chuck it in the trash. Likewise, if they are simply upgrading someone’s car (and removing perfectly good parts) the old stuff goes in the trash.

If you’re able to recognize or look up car parts you can sell them for a pretty penny to people who are looking for stock replacements.

I’ve also found items such as lawn mowers (and even a mini motorcycle) in similar dumpsters.

One of my best finds this past year was a dumpster full of around 40 pairs of skis and snow boots that were tossed out by a rental company at the end of the season.

The rental company had made hundreds of thousands of dollars renting the skis out over the winter and they didn’t need the $6,000 that they’d get from selling the second-hand ski. But I did! And what’s more, I had the time to do it!

While finds like that are super rare, I’ve found things like bike frames, weights, helmets, baseball mitts, and more!

A good rule of thumb is that the bigger and more profitable a corporation is, the more prone they are to producing waste. It simply isn’t worth the disruption in their workflow to try and salvage a pallet of damaged or spilled goods.

If you’re trying to make money dumpster diving them frequenting dumpers used by large chain stores is a great start. Look up anything you find that’s still in the box or package.

If you’re struggling to find anything on this list, maybe you just need to switch up where you’re looking. A few excellent dumpsters provide us will all the goods we can handle. Check out our article on the Best Places To Dumpster Dive if you’re stuck.

Where To Sell Your Dumpster Finds

If you want to avoid shipping your finds, focus on things that you can sell locally. The main advantage to selling things locally is that it opens up the possibility of selling larger items (furniture, for example) that wouldn’t be practical to ship.

If you’re looking to sell things locally, some of the best places to try are:

This is our go-to since we are able to sell things quickly and without fees. If we had a great night dumpster diving then we’d just stop at a pawn shop on the way home and turn as much of it into cash as we could.

If you routinely find building equipment or construction materials you’ll want to start building a network of contacts in the industry.

While this isn’t a specialty of mine I have a friend who seems to have every contractor in the area on speed dial. If he finds something worth selling he simply texts a picture of what he has to a bunch of friends and can sell his goods in a matter of minutes.

If you have the ability to wait for a sale you can make way more money selling your dumpster finds online. This effectively cuts out the middle man (such as a pawn shop) and gives you access to millions of customers with more money in their wallets.

If you want to turn your finds into money, check out some of our applicable guides for selling on eBay and Mercari:

Once you’ve exhausted every other option for selling your dumpster finds, have a yard sale!

We have a storage unit that we empty out and have a massive yard sale 2-3 times per year and we typically bring in a couple of thousand dollars at each sale.

Yardsales are great for making money from your dumpster diving but you’ll have to price items much lower than you would for any of the other methods.

Now here’s one of my biggest pieces of advice, after you’ve had your yardsale, load everything up and take it to a thrift store.

If your purpose is to make money (and not just gather stuff) then don’t let unprofitable things clog up your system.

Can I Sell Food I Find In Dumpsters?

In short, no, don’t do it. Selling food from dumpsters can put you into all sorts of trouble.

There are many brave souls who are willing to take the risk of eating dumpster food but trying to sell what you find to others is typically a losing proposition. It puts another person (who may not be aware of the risks) in danger. The items were thrown away for a reason after all.

No to mention that you don’t have a license to be selling food.

If you want to learn more about the legalities of dumpster diving be sure to check out our recent article on the subject!

A good rule of thumb is to pass on anything that has an expiration date if you don’t have an immediate personal use for it.

At the end of the day, making money dumpster diving is simply a matter of being innovative and taking some initiative.

If you are truly finding good things and can’t figure out how to turn them into cash then maybe this is not the hobby for you!

If you’re short on time, be sure to learn the best days to dumpster dive so you can maximize your finds in a couple of days per month.

However, if you have the tenacity to figure it out, dumpster diving can turn into a profitable side hustle that brings in anywhere from a few hundred to a few thousand dollars per month.