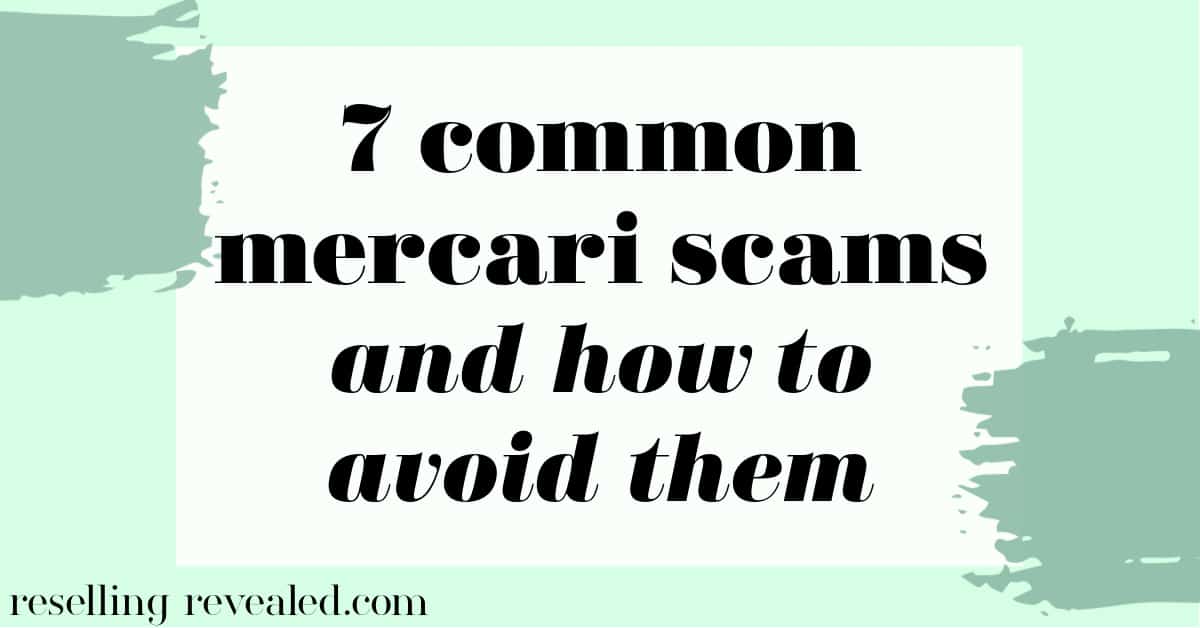 There’s nothing quite like getting a package in the mail. Unless it’s the beautiful Louis Vuitton bag that you bought off Mercari that turns out to be a can of soup because you got scammed by the seller.

On the other side, there’s nothing quite like selling a Louis Vuitton bag on eBay and having the buyer open a return and send you back a stinky shoe.

Every new selling platform is born into this world with some loopholes. Loopholes that crooks and jerks are quick to exploit. Actually, scratch that. Every single instance that involves the exchange of money brings out the crooks. While eBay has long been famous for scams and fakes, Mercari might be giving them a run for their money.

As we passed the 300 sales mark on the platform and were started working on our complete review of Mercari I decided that it was high time I put together a list of the common scams that people face on the platform.

Luckily we haven’t faced all of these. However, because we’re neck-deep in the reseller community on Instagram, Facebook and YouTube we hear all the horror stories.

So take what you can from these cautionary tales and hopefully you’ll be able to avoid them yourself!

The 8 Most Common Mercari Scams

1. Lying About The Condition Of An Item

This is the most common Mercari scam and one of the hardest to combat.

Both buyers and sellers routinely lie about the condition of an item, the buyer to get more money, the seller to get a refund, or start a return if the item doesn’t work for them.

On eBay, I’ve had dozens of returns for clothing that didn’t fit the buyer…and it also just happened to be “in terrible condition….”

Avoiding It As A Seller

As a seller, I always do my best to objectively describe an object. I don’t try to “sell” the item in the description by saying that it is in awesome condition etc. Words like “awesome” can mean very different things to different people. Instead, I describe each flaw and then state that the item has typical signs of wear from normal use.

If you’re selling an item that is damaged or broken, be sure to include that in the title, the description, and anywhere else you can. Very few people read the description and you’re likely to get an angry buyer even if you described things correctly.

Avoiding It As A Buyer

As a buyer, the best way to avoid a scammy seller is to exercise caution and, when in doubt, don’t buy. If a deal seems too good to be true, pass. If the pictures are terrible and the description is ambiguous, pass. If the item is electrical and it doesn’t show pictures of it turned on or functioning, pass or ask for pictures.

Don’t ever be afraid to ask for more information. Good sellers don’t mind and scammers/bad sellers will typically ignore your messages.

Believe it or not, it’s actually against eBay rules to sell any sort of fakes on their platform. Despite this, the platform has become well known as a place to buy bootleg items. Now imagine how much more prevalent this is on Mercari where there is an influx of new sellers and less moderation.

The key to avoiding buying fakes is very similar to avoiding items in poor condition. Just be smart. For example, no one is going to sell their authentic Louis Vuitton purse by taking three crappy pictures of it crumpled up on their unmade bed.

Always ask for validation or additional pictures. If someone is angry about you asking, that’s a red flag.

3. Switching The Address In Transit

This was a huge problem when Mercari first started growing but it seems to have fallen by the wayside a bit.

The scam goes like this: the seller ships your “item” to you on their own (not using the Mercari shipping system) and uploads tracking. They really just shipped a box of garbage (like literal garbage). Once the item is accepted by the carrier, they call and change the delivery address, typically delivering it somewhere random in your city. Once the trash box is delivered, they hope you’ll just keep waiting for it and not notice it’s delivered for 3 days until the rating/return window is passed. The seller then has your money and the item and you have nothing.

The best way to avoid this is simply to be on top of tracking your item. If an item shows as delivered and you don’t have it you should file a case with Mercari ASAP and they will handle the situation.

4. Offering Payment Off Of Mercari

While Mercari has had some success at corralling them, bots are still rampant on Mercari.

The most common version of this scam is pretty simple: you see an in-demand item listed at a very good price. You do your due diligence and message the seller to make sure they’re not a crazy scammer. They immediately respond with something like “my account on here isn’t accepting payment, please email/text me at xxxxx to pay.” It turns out that they are a crazy scammer.

If you fall for something like this and pay outside of Mercari, you aren’t getting your item.

If you get messages like this as a seller it’s typically a robot trying to harvest your phone number or email. Unless you like violating Mercari’s TOS just to chat with a robot I’d avoid responding. Just hit that Report button and move on.

5. Sending Back A Fake/Worn/Different Item

Across every platform is the ol’ switcheroo. A person buys your item, you send it, and then they open a return for some unrelated/untrue reason. Instead of sending back your item, they send you a worn-out version of the same thing, a rotten ham, or a pair of used underwear (just as examples).

As sellers, we’ve had the pleasure of experiencing this scam multiple times. Sometimes it’s not an outright scam but just a careless buyer who returns an item with crappy packing. Either way, you’re out the money. Or are you?

Filing a case with customer service is typically not helpful, especially on Mercari. Mercari has a tendency to refund buyers as soon as (or before) the return shows as delivered. So, in short, you might be out of luck.

Some sellers have had luck filming the package while they open it and then submitting the video to customer service. Others have had luck confronting the person who returned the item and telling them they’ve committed mail fraud (a felony).

Typically we just write off the cost of the item and consider it a cost of doing business. After all, rule #1 of business is that some people suck and you need to account for them.

6. Promising A Solution To Run Out The Clock

While I’m not sure that I would consider this one an outright scam, there’s no doubt that it’s a bit of trickery that crappy sellers use to screw people out of their hard-earned dollars.

If you have a seller who promised a solution but doesn’t deliver it ASAP, get customer service involved. On Mercari you have only 3 days to open a return. If a seller can get you to delay opening a case for that length of time then they can get away scot-free.

While every platform claims to protect its sellers, very few seem to actually do so in practice. Even on platforms like Mercari where sellers are the lifeblood of the company the customer always seems to be right.

Often times this plays out as a person contacting customer service and claiming that you scammed them in some way (fake item, damaged, etc.) There have been instances of people getting refunds without the seller ever being notified. Bad deal.

Another tactic people use is to message you and then open a case saying that you’re unresponsive. Be sure to reply directly (but not emotionally) to every message you get from an actual buyer. Often times a scammer will fade into the woodwork if they find out you’re an active seller who is on top of things.

If you want to keep your account on Mercari you can’t go the route that some people do and file a case with your bank. Instead, appeal to customer service and make sure they know your side of the story. They might reopen the case and find an outcome in your favor.

At the very least, the scammer will have less opportunity to do so again. Mercari tracks people that get reported often and so if you do your part and tattle, they won’t be on the platform for long.

It’s not surprising that scammers on Mercari are recycling the same old cons they used on eBay when it was new. This Mercari scam is special however because it’s a buyer-to-buyer scam. If you list an unusual item that gets flagged as counterfeit immediately, it’s possible that someone who is selling the same item reported you to lessen their own competition.

We’ve had items get flagged a couple of times in a row (usually within minutes of listing) before we give up listing it for a time. Having too many violations will get your Mercari account limited. Instead, try posting the item on a different platform or waiting a few days.

Unfortunately, there’s not much you can do to identify who’s reporting you. You can contact customer service and let them know of the situation but it’s unlikely that it will help you with the current listing. This is one of the main reasons that we use List Perfectly for all of our cross-posting. We can cross-post an item from Poshmark or eBay to Mercari within 30 seconds. So, if we have to take it down and wait, we haven’t wasted much time.

As you’ve obviously gathered, there are no perfect ways to protect yourself from getting scammed. It’s just part and parcel of doing business on the internet. Take heart, however, because most Mercari scammers end up getting indefinitely suspended within a short period of time.

My best advice for avoiding Mercari scams is this: be smart and cautious as a buyer and list a ton of stuff as a seller so your sales make up for the few scams you run into.

In the 300+ sales, we’ve had on Mercari we’ve only been scammed a single time. So, despite all of our worry-mongering above, go forward with courage, men (and women)!