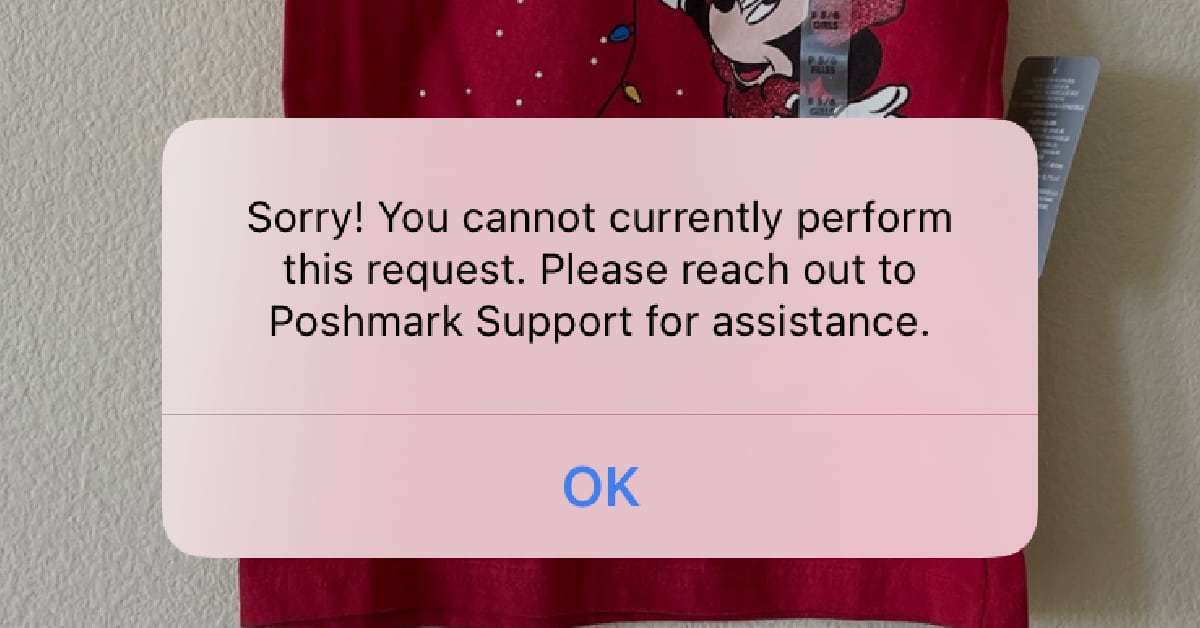 Ever since I started using List Perfectly I guess I could classify myself as a Poshmark seller. I’m also an eBay seller and a Mercari seller (since it makes crossposting easy) but when I had a time crunch a couple of months ago I had to decide which platform to drop.

So I dropped Poshmark.

At least, I put my store on vacation mode until I had a bit more time to manage the sales that selling on three platforms was generating.

So imagine my surprise the other day when my wife sent me a Poshmark listing for something I had been looking for for a while and I was unable to buy it.

I clicked through just like I always would but, when I went to click Buy Now I was greeted with a message that said:

“Sorry! You canot currently perform this request. Please reach out to Poshmark Support for assistance.”

I obviously didn’t reach out to Poshmark because I wanted to figure it out myself. I probably should have just asked but I’m stubborn like that.

Since Poshmark wasn’t down (my first thought) I was left with only one conclusion. I had been banned for some reason.

I have since learned that there are a couple of other reasons that you could get that message so let’s talk about whether you’re banned and, if you’re not, what else could be going on.

Am I Banned On Poshmark?

Unless you’ve been doing something egregious, odds are you’re not banned on Poshmark.

It turns out that I was restricted which meant that I couldn’t buy, list, share, or any other action associated with running a Poshmark closet.

The first thing you should do if you have gotten the “You Cannot Currently Perform This Request” popup is to go and check your email. Poshmark doesn’t typically suspend people without communicating the reason.

In my case, I found an email that I had received several months before and somehow not seen (Poshmark sends a lot of emails…) stating that I had been suspended for having “Multiple unshipped sales.”

So, go do a search in whatever email you created your Poshmark account with for “Poshmark Restricted” and, hopefully, you’ll find the culprit.

Since Poshmark’s inception in 2011, the platform has exploded in popularity, with millions of users worldwide. That level of success has not been without its controversies, however. The core issue of many people that rag on Poshmark is their being banned or scammed.

So, what are some of the reasons that you might have been banned, suspended, or restricted on Poshmark?

Poshmark has a set of Community Guidelines that all users must follow in order to use the platform. These guidelines include things like not sharing personal information, not engaging in hateful or abusive behavior, and not spamming the site with irrelevant content.

Poshmark takes fraud very seriously and has a zero-tolerance policy for it. Some examples of fraudulent activity include listing fake or knock-off items, using someone else’s photos without their permission, using dishonest pricing tactics, or failing to disclose significant damage to an item.

In theory, Poshmark immediately removes anyone involved in fraud. However, they’re not always adept at figuring out who the fraudster was in a situation and have been known to ban the person who was actually the victim.

3. Not Abiding By Copyright Laws

Poshmark is very strict about copyright infringement and takes action against anyone who violates copyright law on the platform. This includes things like listing unauthorized replicas or counterfeit items, as well as listing items that infringe on someone else’s trademark or intellectual property rights.

Now, you might ask, does this include using stock photos? Well, probably. Most sellers I know (including myself…) default to using stock photos at times when something is difficult to photograph. It’s not technically allowed unless you have permission from the company to use the picture but I don’t know of anyone that has been banned for it.

Poshmark has a number of different policies that all users must agree to when they sign up for an account. These policies include things like not creating duplicate accounts, not circumventing Poshmark’s payment system, and not scraping data from the site without permission.

It’s worth noting that most people don’t immediately have an account banned that is otherwise in good standing. If you run afoul of Poshmark’s guidelines it’s likely that you’ll be restricted (as I was) and given a chance to commit to better service.

If it’s your first offense of Poshmark then you’ll probably be able to get your account reinstated quickly (meaning within 24 hours).

Here’s the email I got from Poshmark when it happened:

From that point it was a simple matter of logging in, accepting their terms, and committing to do better.

Right around the 24-hour mark I got another email letting me know that my account had been reinstated.

Once that had happened I logged in and tried to buy the item I wanted again. No “You Cannot Currently Perform This Request” popup this time and all the actions were once again available in my account!

However, I’ll likely be a bit more careful in the future as I can’t imagine that things will go as smoothly if it happens again.

For some people, getting rid of the popup has been related to something as easy as confirming their address or verifying their email.

Whatever it ends up being for you, you probably have an email explaining the situation.

If you don’t, Poshmark Support is always available to help you figure out the situation!