I’ve been griping about my Rollo thermal printer for more than two years. Don’t get me wrong, I love it.

In fact, I think it is the best-priced printer on the market for anyone running a small business.

So what was I griping about? Not being able to print from my phone or wirelessly from my laptop.

I sell on several platforms and nearly all of them have apps from which I could print my shipping labels. Now if only I had a wireless Rollo printer.

Rollo announced near the end of 2021 that they would finally have a wireless version of their extremely popular printer coming out. This was a huge relief as I was looking to convert my existing Rollo printer to wireless or go another route if I didn’t get a solution quickly.

Now that I have the wireless version, let me tell you, it was worth the wait! Let’s take a look at it.

See This Printer On Rollo’s Site

A Look At The New Wireless Rollo Label Printer

First off, the bad news. Rollo’s new wireless printer is hard to get your hand on at the moment. Because it is only available in limited numbers (they only sell a certain number per day) there has been a reseller market that has grabbed on and is trying to scalp people.

To my chagrin, I ended up buying a wireless printer that was new in the package off of Mercari for $305, which equates to $25 over MSRP. Nothing to be too made about.

The box with your wireless printer comes with the minimum of what you need but is well packed. You’ll get:

I literally had my printer out and had printed my first label within 10 minutes. If I had actually read the instructions and not done the whole thing on camera I think I could have done it in under 3 minutes.

One of the most surprising things was that, despite how fast the Rollo printer was, the label was much higher quality than the labels from my old Zebra printer.

If my recommendation came solely from set-up then this printer and company would get an A+.

Set Up Your Rollo Printer In 5 Steps:

If you want to speedrun your set-up, here’s exactly what you’ll need to do:

And you’re ready to print! You can immediately start printing labels from either your computer or your phone.

While I’ve only used my new printer for about a month, I feel like I can offer some insight into most of the features that it provides (or claimes to provide).

Most people’s first impression about a Rollo printer when they pick it up for the first time is “Wow, that’s heavier than I expected!”

Rollo printers are not fragile pieces of plastic. They are built with some heft. My wireless printer has first tabs that feel high quality, a button that doesn’t feel mushy, etc.

Overall I have been very impressed with the build quality (and overall look) of the printer.

I didn’t realize that the print head on my last printer (not a Rollo) was failing until I replaced it. The printer quality for the original Rollo and the wireless version is excellent.

Some shipping companies (and Amazon FBA) require a printer with 300dpi print quality but I’ve used a Rollo for hundreds of shipments and never had a problem.

My Zebra printer on the other hand produced such poor quality FedEx labels that I routinely had customer service at the store reprint them before they would accept the package.

Overall, the print quality is impressive, especially for such a small package. I’ll be interested to see how it holds up over time but for the first couple hundred labels, there has been no change.

People make a big deal about the Rollo’s print speed and, when it came out, it was at least novel. Now there are several other companies that have copied Rollo’s design and have the same claimed speeds.

For most people, this is a nothing-burger. Unless you are printing hundreds of labels all at once you probably won’t even notice the speed difference. We’re literally talking about 1/3 of a second per label.

I will say that the printer does receive and process the print order quickly so there’s slightly less waiting around there as well.

The reason I gave the printer 4 stars is that, despite all the claims, I don’t feel that this feature deserves nearly the attention that it gets.

Wirelessly printing to my Rollo from my laptop and the desktop computer has been absolutely flawless. It was easy to connect and hasn’t disconnected a single time.

It is worth noting that your printer connects over wifi so it has to be in an area that receives a decent signal if you want to print. Bluetooth connection is not an option for the Rollo.

The reason I subtracted a start here is Rollo’s clunky app. I haven’t had any serious problems with it but it’s not super streamlined or user-friendly. (You have to use the app if you want to connect your phone).

This is, without a doubt, the easiest-to-set-up printer I have ever used. Since there are no drivers to install it is easy to get going, to add it to another computer, etc. Being able to print to my label printer from another room (as long as I’m on the same wifi network) is not necessarily a game-changer but it’s definitely nice!

I wish I had a bit more to go off of here but, seeing as how the wireless printer has the same hardware as the original Rollo I have to imagine that durability would be similar.

While I’m working on devising some sort of torture test for my Rollo printer, it has earned itself 5 starts in the meantime (until I feel it deserves differently).

Find This Printer For Sale

How The Rollo Stacks Up To The Competition

The original Rollo printer’s major claims to fame were twofold:

I had moved to a Rollo printer from a Zebra LP 2844 which has been (and still is) the preferred workhorse printer for literally thousands of businesses (not to mention UPS). I knew I wanted a wireless printer to give me more options but I was curious how Rollo’s new printer stacked up against their original printer and the LP 2844 that much of the industry still uses.

Rollo Wireless vs Rollo vs LP 2844

As you can see, the Rollo and Rollo Wireless are effectively the same machine. One just has wireless. The Zebra, on the other hand, wings in a few areas and trails in others.

Now let’s be honest, I recommend everyone who is in the position to do so buy a Rollo printer. But you don’t have to have one. If you’re pinching pennies, you don’t need a wireless printer and probably don’t need a Rollo, period. You can find something cheaper that will perform “just about” as well. It will be a bit more frustrating to set up and deal with but you can see that the Zebra Lp 2844 is still a legit competitor that will print labels for years to come.

Rollo vs The Top Wireless Printers On The Market

The question now comes, what if you have to have a wireless thermal label printer. Should you get the Rollo? We know its release has been hyped for a long time but what if there is something else on the market that performs just as well?

Let’s take a look at how the Rollo stack up to the wireless label printer that might be considered its most direct competitor, the Brother QL-1110NWB. 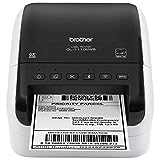 If you are a home shipper and need wireless capability, get the Rollo. You’ll have a better community of support with like-minded people and will save some money. The Brother’s suite of features will simply be overkill.

However, if you’re running a business with several shipping stations the Brother printer is purpose-built for you and your situation. So head in that direction.

Pros And Cons Of The Rollo Wireless Printer

I feel like I’ve spent the majority of this article extolling this printer’s virtues so I’m mostly going to focus on, what I feel, are the two significant negatives.

As you might have expected from such a highly reviews printer, neither of the issues I have with the printer are grievous.

However, I will say that I’ve never had to contact customer service for any issues related to my printer. They include a card with the printer that claims “Most issues can be solved in less than 1 minute!” While that’s a bold claim, I don’t doubt it because the printer is so easy to use.

Overall, I can’t imagine a situation where the cons of the Wireless Rollo would be significant enough to stop a person or business from using it to its full capacity.

So, Should You Buy It?

In my mind, the Rollo Wireless printer is the perfect option for a small niche of people. If you are looking to buy a thermal printer for the first time, get this printer.

If you already have a printer and don’t have a specific reason to upgrade to a wireless printer, maybe rethink. I do love my new printer (and buying it will be a tax deduction when I file) but I didn’t have to have it. If you have the original Rollo (or something similar) you probably don’t need to run out and upgrade.

Unless you think printing from your phone or not having a single connecting cord will actually make a difference to your business the wireless option probably isn’t worth the cost of upgrading.

So is the wireless Rollo printer worth it? Absolutely. If you need what it has to offer, there really aren’t any other options on the market to give it a run for its money. It’s priced well, is super easy to set up, and is incredibly dependable/durable. Or, at least, it hasn’t given me any problems yet and since I was able to put 10,000+ labels through the original without any issues I expect similar performance from the wireless version.

But only time will tell.

So if you’re in the market, take this as my full endorsement to go ahead and pick up the wireless version from Rollo’s website! (the only place it is available)