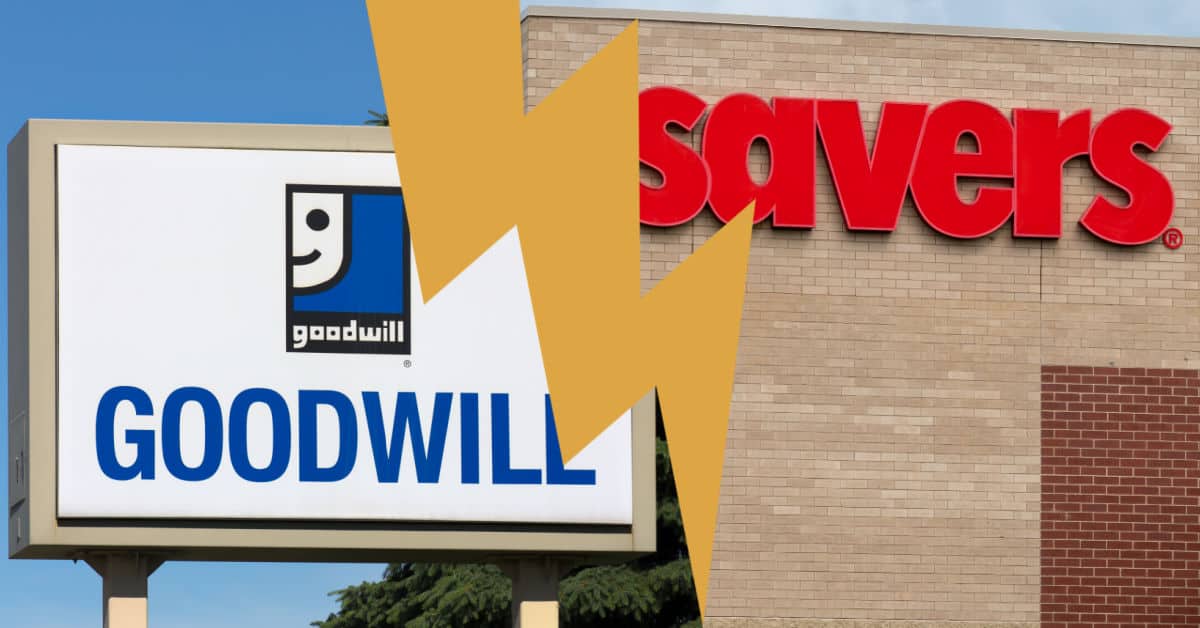 Pretty much every thrifter I talk to has strong feelings about which thrift stores are better than others.

More often than not this is simply because the specific stores in their area are not a good example of all the others. As in, they might have the worst Goodwill in the world in their town and think that every Goodwill is terrible.

However, on a wider scale, I wanted to take a stab at comparing Goodwill and Savers to see which one is better for shoppers, donors, and resellers.

We’ll take a look at how their business models, pricing structures, and community aims stack up so that, if someone asks you which one they should shop at, you’ll have an answer!

But first off, let’s see how they’re similar.

On the surface, Goodwill and Savers both appear to be non-profit organizations that operate thrift stores and collect donations of used clothing and other household items.

Ostensibly, they both want to help as many people as possible in getting low-cost goods and keeping stuff out of landfills. But who exactly do they want to help? Themselves? Their CEO? Let’s see.

Goodwill is a network of independently-operated stores that are affiliated with Goodwill Industries International, a non-profit organization that provides job training and other services to people with disabilities and other barriers to employment.

In other words, the Goodwills in each area are owned and operated separately (similar to a franchise) but under the direction of a local board of directors.

This should put to rest the theories that have been floating around of the overlord CEO of Goodwill profiting millions (as he doesn’t exist).

As with most thrift stores, Goodwill sells donated goods, such as clothing, furniture, and household items, with the proceeds going towards funding these job training programs.

Savers, on the other hand, is a for-profit company that operates thrift stores across the United States and Canada. While Savers does collect donations of used clothing and other items, it is not a traditional non-profit organization. Instead, the company sells donated goods in its stores and uses the profits to fund various charitable causes.

So, in short, Goodwill functions as a thrift store as a means to provide job training and give community support. Savers works to maximize profit and, in turn, use those profits to fund charitable causes.

How Donations Are Handled

Their different business models also inform the way that Savers and Goodwill handle donations as they have different goals with their sales.

Since Goodwill stores are typically run by local non-profit organizations, which means that donated goods are typically sold in the same community where they were donated. This allows Goodwill to provide affordable goods to local residents and support the local economy.

Savers, on the other hand, sends many of the donations it receives to developing countries, where they are sold for a profit. This means that the donated goods may not necessarily benefit the local community in the same way as they would if they were sold at a Goodwill store.

I should also note that, since Savers seeks to maximize profit, they seem to create more waste than Goodwill does. Goodwill gives away their unsellable goods (or sends them to the Goodwill Outlet where you can buy by the pound) but Savers pretty much throws away everything that can’t turn them a profit.

Recently I donated to a local Savers and the employee told me that if I cared about what happened to my stuff, to go down the street and donate it at Deseret Industries. That Savers was overrun with donations and 95% of what I gave them was going to go straight into the dumpster.

Which One Is More Popular?

While I don’t really have a pulse on which store is more popular, perhaps we can figure it out.

Vote for your favorite and we’ll see how the odds stack up over time!

However, I will say that some indicators suggest that Goodwill may be the more popular of the two.

Which is better for resellers?

Even after being a full-time reseller for more than 5 years and visiting literally hundreds of different thrift stores, I don’t have a definitive answer here.

The thrift store that is best for resellers is often different based on location and the day of the week.

I’ve had great luck at both Savers and Goodwill and have been skunked at both as well.

I will say, however, that my experiences at Goodwill are typically more consistent as the stores, in general, are nicer and better organized.

The only real way to know is to visit a store consistently and see what kind of finds there are.

The majority of the complaints that I’ve heard leveled at Savers and Goodwill are not at the organization as a whole but at individual stores.

I’ll let you in on a secret… lots of people suck. Savers sometimes hires jerks, and so does Goodwill. It’s really hard to point to one and say that the overall customer service or shopping experience is significantly different in every store.

However, a few criticisms do hold water.

Since Savers is a “for profit” business they are often accused of overcharging for their goods and they seem to be consistently driving up prices. I know that I’ve found used goods at my local Savers that can be purchased cheaper and brand new on Amazon.

Also, some people criticize Savers for its lack of transparency about where it gets its merchandise and how it is used to fund charitable organizations. For example, some shoppers feel that the company isn’t clearly disclosing information about which charities are receiving donations from sales at its stores.

Goodwill has also been on the receiving end of many negative campaigns although many of them are misinformed.

They receive the same flak for overpricing their items and not inspecting everything they sell.

But where they run into the biggest problems is in how they compensate their leadership (they pay them way too much…) and how little they pay their employees.

A few loopholes in the law let Goodwill employ people that would otherwise be considered unemployable for significantly less than minimum wage (as low as $0.22 per hour). So the leadership gets rich while disabled or compromised employees make only a couple of dollars per hour? If that’s not a valid criticism I’m not sure what is.

Is One Really Better Than The Other?

Honestly, I shop at thrift stores to get great deals and find good things. I feel more of a connection with the person that donated the item than the store selling it.

The “best” thrift stores are almost always found on a case-by-case basis.

So, no matter the problems the store has, I’d encourage you to try out each store in your area until you find your favorite. It might be Savers, it might be Goodwill, or it might even be The Salvation Army, I couldn’t tell you!

But good luck in your thrifting endeavors whichever you choose!