Whether you’re looking for a thermal label printer for your home business or 30 label printers for your fulfillment warehouse the LP 2844 is one that comes up again and again.

It is a standby machine that, despite its continued prevalence, has been discontinued by Zebra for almost 10 years! The business world doesn’t seem to have noticed the last of support however as it continues to print labels for tens of thousands of businesses.

But do people use it just because it’s the first option that comes up? Is it the king of the heap simply because it was the king long before there was actually a heap of label printers?

Well, we used a Zebra LP 2844 in our business for more than 4 years and can give a pretty decent insight into how it works, where it falls short, and if it’s right for your business.

Overall, the LP2844 is a very good printer for the price. It is durable, prints quickly, and has a lot of online support. The most common criticism is that can be difficult to install the drivers and set it up correctly.

How Does The LP 2844 Stack Up Against Modern Printers?

Very few label printers (or business tools in general) have much staying power when upgrades or new solutions come out. The LP 2844 was replaced by Zebra’s GC420d in September 2012 which, in turn, was replaced by the ZD200 in January 2020.

So why haven’t the masses moved on to these two other models?

Well, let’s take a look at how the stats stack up. We’ll use compare the LP 2844 with its successor (the GC420d) and throw the number one selling modern label printer (the Rollo) into the mix just for variety: 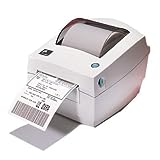 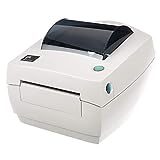 Spot the difference? I’ll give you a minute, there’s not much to see.

The main advantage the GC420d has over the LP 2844 is a 32-bit processor for faster label throughput and 8MB of flash membory for increased fonts/graphics/storage. Not that those things will make much difference to you in day-to-day use.

Long story short, most label printers have very similar hardware and no discernible differences for day to day label printer.

So, in my opinion, you should choose a printer based on ease of use/set up and durability.

What It Excels At (The Good)

That may not seem like a huge list but hey, it’s a label printer. It’s not a rocket. It will print all the labels you need it to for as long as you are still shipping packages.

However, despite all its great attributes, it’s not perfect. While none of its negatives qualities are deal-breakers, you should still know exactly what you’re getting into.

I’ll have to start my review of the LP 2844’s bad qualities with a ghost story.

I woke up one night from a small band and constant whirring sound coming from my office (which is just off my bedroom). I snuck over to it with a heavy book I keep on my nightstand (to smack an intruder, of course) and did see anything.

It turns out it was just my printer, printing for all it was worth. Blank label after blank label.

By the time I got it turned off it had printed almost 200 blank labels. Why it decided to start doing that in the middle of the night I’ll never know. It never happened again so I’ll just chalk it up to a power surge instead of assuming every LP 2844 is haunted.

However, there are some more legitimate features (or lack thereof) on the printer that might bother you or even be a dealbreaker:

All-in-all, there really aren’t that many problems with it. The fact that we used it for 4+ years should be a testament that it’s not too frustrating.

Other Thoughts & Things To Be Aware Of

We resell thrifted, liquidated, and store-returned items online (mainly on eBay but also via Mercari, Amazon, and Poshmark).

During the time we used the printer we put around 4,000 labels through it. While I won’t say it was flawless, it did the job. If we hadn’t gotten a new printer for free we would still be using it.

During the time we had it, I’ll admit, I didn’t do a single bit of cleaning of maintinance. Our printer came in a kit with a brush that was mean to clean the rollers and I might have thought about it once. Regardless, it kept right on spitting out all the cheap labels we bought with adresses on them.

For an eBay business or other small business that is concerned about its bottom line, I think the LP 2844 is an excellent choice. It the cheapest overall option and comes with tons of support and a virtual library of online information.

Would I Buy It Now?

For A Home-Based Business: If you are only even going to buy one thermal label printer (eg. you don’t plan on scaling your eBay business or other home-hustle) then I would probably give the LP 2844 a pass. Instead, I’d go with the Rollo label printer which is more simple and is still supported by the company.

Another reason I’d give it a pass is if you have specific needs. For example, if you need the ability to print labels wirelessly or want to print multiple sizes of labels (in which case I’d recommend the Brother QL-1110NWB and the DYMO 4XL respectively).

For A Commercial Enterprise: In a medium to large warehouse situation, this might be the perfect printer. There is a decent amount of online support, they’re cheap to fix and replace (also you can rent them from UPS…), and they last forever.

If I had multiple dedicated shipping stations I would hook up an LP 2844 to each of them and never mess with them (since most of our troubles surrounded disconnecting it and setting it up again).

If you are looking seriously into buying a Zebra LP 2844 thermal lable printer, here are some of the resources that we used when we had one:

For the majority of shippers, a LP 2844 is a good option. Are there other printers out there that will do the job? Sure. But very few have gone the distance and been as thoroughly tested as the LP 2844. So get yourself one!

4 Best Postal Scales for Shipping Orders (On Every Budget)